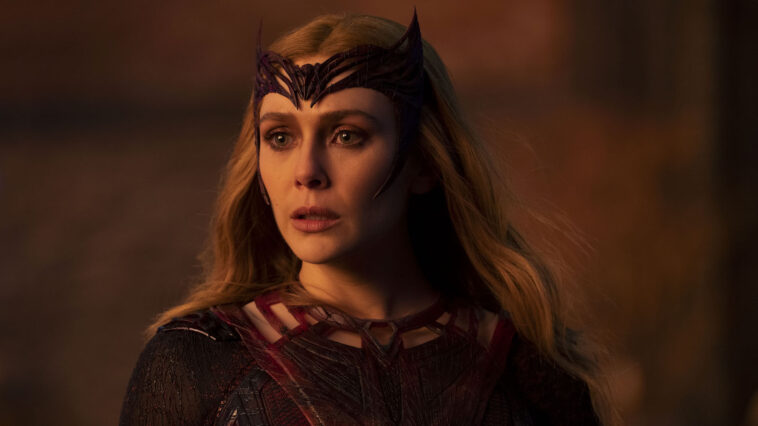 SPOILER ALERT: This story discusses major plot points of Marvel Studios’ “Doctor Strange in the Multiverse of Madness,” currently in theaters. Do not read until you’ve seen the movie.

Practically from the moment that Marvel Studios chief Kevin Feige announced that Elizabeth Olsenwould star in the Disney+ series “WandaVision,” he also made clear that the events of that show would tie into Olsen’s subsequent appearance as Wanda Maximoff in the feature film “Doctor Strange in the Multiverse of Madness.”

What Feige did not reveal — and what Disney carefully obscured in its marketing for the film right up to its release in theaters — is that Wanda doesn’t show up as Strange’s compatriot in “Multiverse of Madness”: She’s the villain.

At the end of “WandaVision,” Wanda fully accepts her identity as the Scarlet Witch, one of the most powerful wielders of magic in the universe. But she also has to release her grip on the town of Westview to free its citizens of mind control. In doing so, she abandons her children Billy (Julian Hilliard) and Tommy (Jett Klyne), who can only exist within Wanda’s magic spell over Westview…

Back to Top
Close
X
Potential spread of disease through plastic pollution…EnvironmentIFL ScienceTypically when people hear about plastic pollution, they might envision seabirds with bellies full of trash or sea turtles with plastic str…

Elizabeth Olsen talks Wanda’s shocking [SPOILER] in ‘Doctor Strange 2,’ and the hardest scene for her to play

X
Climate change responsible for flooding – Lagos govt…EnvironmentThe Lagos State Government has said flooding on Lagos Island is caused by the effects of climate change and blocked drains in the area.The Commissione…