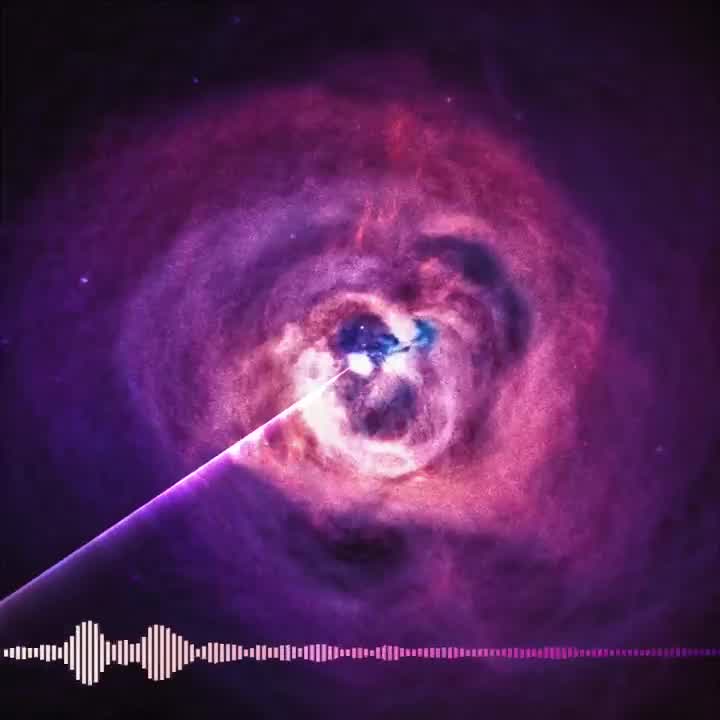 As part of an effort to “sonify” the cosmos, researchers have converted the pressure waves from a black hole into an audible … something.

NASA has released audio from radar that picked up sounds coming from a black hole to coincide with Black Hole Week.

NASA says the noise is from the black hole at the center of the Perseus galaxy cluster, which experts discovered had a pitch over a “million billion times deeper” than the limits of human hearing, making it too deep to be heard.

Experts from the Chandra X-Ray Observatory built on previously extracted astronomical data to produce the sound waves. Now a new sonification brings more notes to this black hole sound machine, according to a release from NASA.

“The popular misconception that there is no sound in space originates with the fact that most of space is essentially a vacuum, providing no medium for sound waves to propagate through. A galaxy cluster, on the other hand, has copious amounts of gas … providing a medium for the sound waves to travel,” NASA said.

NASA on Twitter: “If a black hole erupts in space and no one is around to observe it, does it make a sound?Not to worry; the @ChandraXray Observatory is here with new #BlackHoleWeek sonifications from galaxy clusters far, far away. Listen: https://t.co/yGu0RuP7TX pic.twitter.com/6rAgJafmAa / Twitter”

If a black hole erupts in space and no one is around to observe it, does it make a sound?Not to worry; the @ChandraXray Observatory is here with new #BlackHoleWeek sonifications from galaxy clusters far, far away. Listen: https://t.co/yGu0RuP7TX pic.twitter.com/6rAgJafmAa

Sound waves of the Perseus galaxy cluster were resynthesized after boosting their frequency quadrillions of times, scaling them 57 to 58 octaves — or about seven piano-lengths — above their true pitch.CreditCredit…NASA/CXC/SAO/K.Arcand/SYSTEM Sounds

In space you can’t hear a black hole scream, but apparently you can hear it sing.

In 2003 astrophysicists working with NASA’s orbiting Chandra X-ray Observatory detected a pattern of ripples in the X-ray glow of a giant cluster of galaxies in the constellation Perseus. They were pressure waves — that is to say, sound waves — 30,000 light-years across and radiating outward through the thin, ultrahot gas that suffuses galaxy clusters. They were caused by periodic explosions from a supermassive black hole at the center of the cluster, which is 250 million light-years away and contains thousands of galaxies.

With a period of oscillation of 10 million years, the sound waves were acoustically equivalent to a B-flat 57 octaves below middle C, a tone that the black hole has apparently been holding for the last two billion years. Astronomers suspect that these waves act as a brake on star formation, keeping the gas in the cluster too hot to condense into new stars.

The Chandra astronomers recently “sonified” these ripples by speeding up the signals to 57 or 58 octaves above their original pitch, boosting their frequency quadrillions of times to make them audible to the human ear. As a result, the rest of us can now hear the intergalactic sirens singing.

Through these new cosmic headphones, the Perseus black hole makes eerie moans and rumbles that reminded this listener of the galumphing tones marking an alien radio signal that Jodie Foster hears through headphones in the science fiction film “Contact.”

As part of an ongoing project to “sonify” the universe, NASA also released similarly generated sounds of the bright knots in a jet of energy shooting from a giant black hole at the center of the humongous galaxy known as M87. These sounds reach us across 53.5 million light-years as a stately succession of orchestral tones.

Back to Top
Close
X
Is this what a black hole sounds like? NASA releases audio from Chandra X-ray observatory…ScienceNASA re-synthesised the soundwaves to human hearing range by “scaling them upward by 57 or 58 octaves” above their real pitch to create the sonificati…