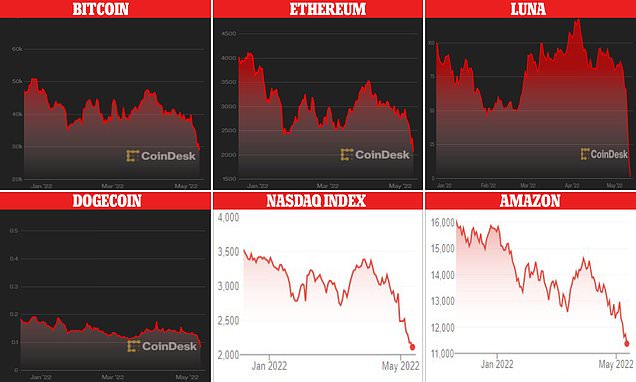 Digital currencies are plunging in value this morning in a so-called ‘crypto winter’ that has lost investors billions and is fueling fears that it is the harbinger of a wider stock market crash.

The world’s second largest cryptocurrency Ethereum has joined the crash – plummeting in value by 20 per cent over the last 24 hours – in the digital downturn that is hammering investors who bought during the Covid years.

Cryptocurrencies have sharply declined in value during the past few days including one that has lost 98% of its value as fears for the global economy spread and investors start to sell off risky assets.

However investors in more traditional stocks are also hurting, with US tech stocks also plunging in recent weeks including Amazon which has fallen 30 per cent in a month.

The FTSE 100 was down 2.5 per cent this morning after official figures showed the UK economy growing slower than expected in the first quarter – and going into reverse in the final month and 2 per cent, respectively.

Many amateur investors took to buying stocks and digital currencies during the Covid pandemic and made money because values were generally rising in a so-called bear market.

Ethereum has now lost more than half of its value this year, Bitcoin has shed a third of its value since January and Luna with 98 per cent of its value wiped out overnight with suicide hotlines pinned to the currency’s Reddit page as a result.

Popular digital currency exchange Coinbase warned users could lose all of their money if the company goes bankrupt – after the downturn led to a 27 per cent fall in its share price.