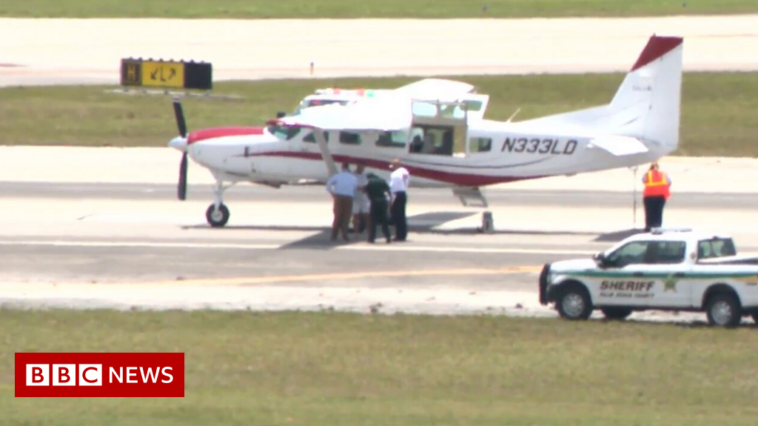 The passenger can be heard in recordings saying he had “no idea how to stop the airplane”.

A passenger with no flying experience landed a plane in Florida after the pilot passed out.

In audio from on board the flight, the passenger, Darren Harrison, can be heard telling air traffic control a “serious situation” was unfolding.

An air traffic controller who teaches new pilots helped guide the man down to Palm Beach International Airport just after noon on Tuesday.

The two later met on the tarmac for a hug.

The nature of the medical emergency has not been revealed, but the pilot is being treated in hospital.

An on-board conversation between Mr Harrison and air traffic control caught the drama,

HARRISON: “I’ve got a serious situation here. My pilot has gone incoherent. I have no idea how to fly the aeroplane.”

CONTROL: “Maintain wings level and just try to follow the coast, either northbound or southbound. We’re trying to locate you.”

Robert Morgan, an air traffic controller at Palm Beach International Airport, was on his break when a colleague came to alert him to the situation.

A long-time flight instructor with more than 20 years’ experience in air traffic control, Mr Morgan had never flown the specific model – a single-engine Cessna 208 – but was able to use a map of the aircraft’s cockpit to give instructions to the flier.

“I knew the plane was flying like any other…

Back to Top
Close
X
My wife lets me have sex with other men as otherwise I'd be depressed…Last PostMY wife knows I am more attracted sexually to men than women and accepts it.She has even said it’s OK for me to have sex with men.It might sound unlik…

X
Calling a man 'bald' is considered sexual harassment, tribunal rules…Last PostBy Lucy ThorntonThe ruling comes in a case between a veteran electrician and his employers. Tony Finn, 64, claimed he had been a victim of sexual hara…