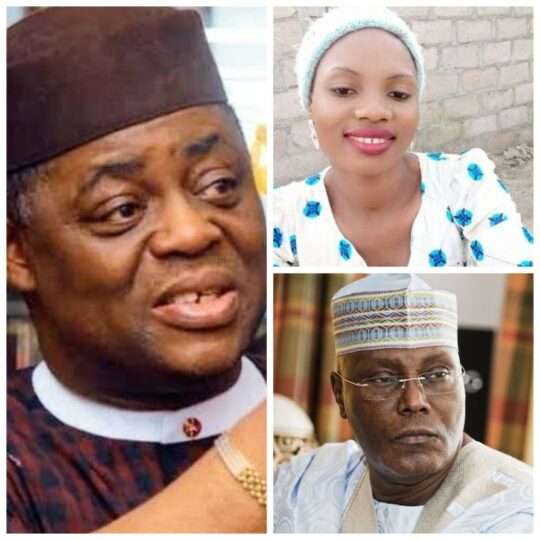 Fani-Kayode stated this while condemning Atiku for deleting his posts against the murder of Deborah.

Atiku demanded justice for Deborah after she was killed by fanatics in Sokoto for alleged blasphemy.

Atiku, however, later deleted and denied the posts after his 2023 presidential ambition was threatened by the fanatics.

“There can not be a justification for such gruesome murder. Deborah Yakubu was murdered, and all those behind her death must be brought to justice,” Mr. Atiku earlier posted. “My condolences to her family and friends.”

Denying the post, Atiku took to his Hausa page and wrote: “I received information that a post was made that doesn’t agree with my orders. I use this to announce that any post without AA is not from me. May God protect – AA.”

Reacting to the development, Fani-Kayode, who was a former member of PDP, said:

“The refusal to condemn the killing of Deborah and the withdrawal of an earlier condemnation is worse than the killing itself. By this Atiku has murdered Deborah all over again and pissed on her grave. He has also encouraged other sociopaths to come out and commit murder with impunity.”

Back to Top
Close
X
Deborah Samuel: There'll be reprisal, civil war if you fail to act now – HURIWA to Buhari,…In the NewsDaily PostHuman Rights Writers Association of Nigeria, HURIWA, has condemned the conspiratory silence for over 24 hours of President Muhammadu Buhari …

X
Deborah Samuel: Why I deleted post condemning killing of student over alleged bl…In the NewsDaily Post Former Vice President and a presidential aspirant, Atiku Abubakar has explained why he deleted a post he made that condemned the killing of…