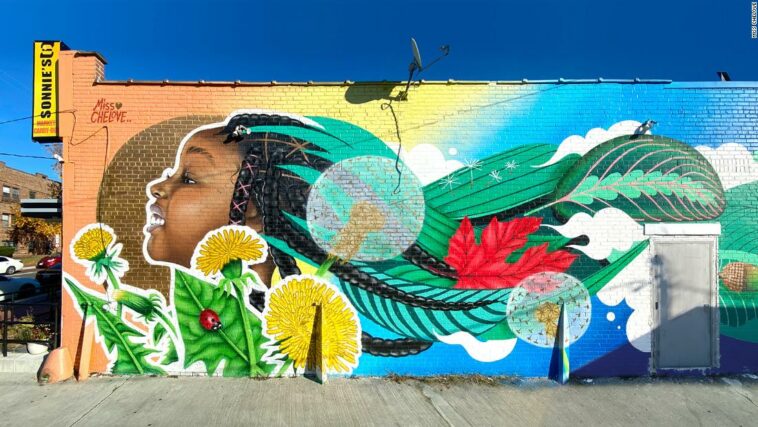 Cita Sadeli saw the start of the pandemic from a different angle than most: standing on an articulated lift, hovering 120 feet above street level. She spent much of early March 2020 painting a mural on the exterior of Hotel Xena in downtown Washington, DC, watching from above as the coronavirus outbreak slowly caught the city in its grip.

“I started March 1, and the city shut down around mid-March,” she said in a phone interview. “I got to see the whole city change from that very high vantage point, people were dragging their office chairs across the square to take it home, because they weren’t going to come back to their office. Everyone was freaked out.”

Her work unexpectedly served as a salve. Titled “Guardians of the Four Directions,” the seven-story-tall mural depicts two warrior women of color holding spears and standing firmly, like sentinels watching over the city. They are meant to represent nature, which Sadeli, who signs her works as Miss Chelove, believes is among the things that gave us a sense of peace throughout the pandemic.

“People would just tell me that they would come out to take a walk at the end of the day, to try to regain some composure and have a sense of normalcy in their life, and they would see these two strong women, and tell me how much stronger they felt after seeing this (mural) unfold during this incredibly unstable time,” she recalled.

The experience encapsulates much of what is unique about street art and working on a large mural, which can be dangerous and inebriating at the same time — particularly in a place like DC.

X
Biafra: “UK is missing in action” – Nnamdi Kanu's American Lawyer…In Other NewsBruce Fein, the American counsel for the detained leader of the Indigenous People of Biafra (IPOB), Nnamdi Kanu, on Saturday tackled the United Kingdo…