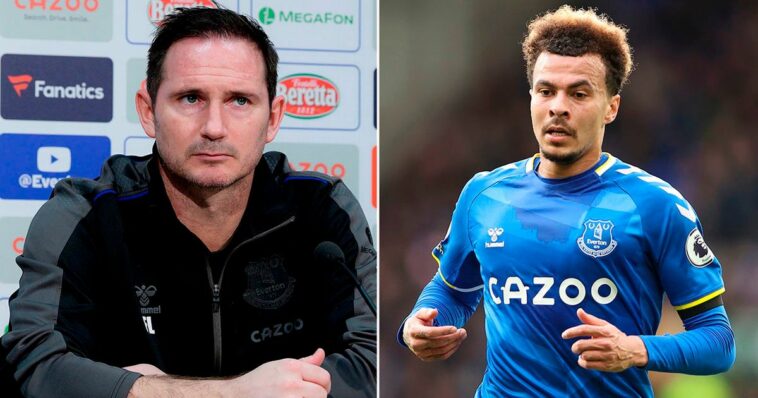 Frank Lampard has provided an update on Dele Alli ’s Everton future and outlined what he needs to do in order to carve open a spot in Everton ’s starting line-up.

The 26-year-old signed for the Toffees in January on deadline day in a unique deal that was initially free, but could potentially rise to £40million depending on how many appearances he makes.

However since then, playing opportunities have been few and far between. He has yet to start a game and has made just nine substitute appearances, the last of which came against Chelsea at the beginning of May.

When Lampard was asked about the former England international on Friday afternoon, he said: “I have had those discussions with him, he’ll be very clear as to where I am and at the moment I’m much more concerned about the collective getting over the line as a group. If Dele plays his part in these three games then great and he steps up as he’s come on at times and done good things for us.

It’s an area of the squad where we have other players who have been playing, that’s just the reality of the situation. He needs to just keep training hard and stay really well focused and fight for the opportunity.”

There was a hope that his move to Merseyside could have reignited a career that started to wane not long after the departure of Mauricio Pochettino in 2019. In the years that followed under more constraining tactical approaches from the likes of Jose Mourinho, Nuno Espirito Santo and more recently, Antonio Conte, Dele struggled.

Some of his issues across recent seasons have been attributed to the mental aspects of his game, with each of those aforementioned managers not boasting the same man-management expertise that Pochettino had…