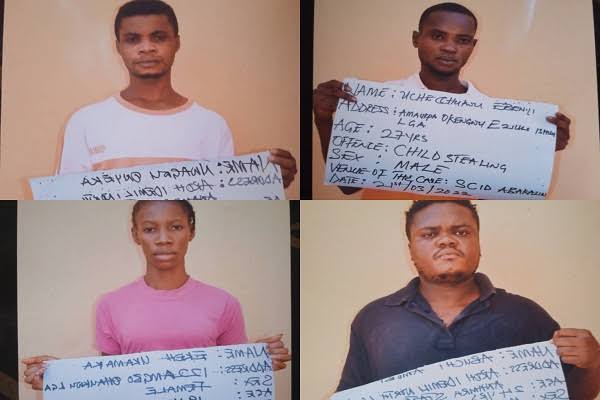 The Police Command in Ebonyi said it has recovered a stolen child after over one month he was declared missing.

This is contained in a statement issued to newsmen on Friday in Abakaliki by the command Spokesperson, DSP Loveth Odah.

The statement noted that the little boy, Okeh Makuochukwu, a four-year-old, had been reunited with the family.

It explained that the boy was discovered missing on March 21 and was recovered on May 3.

“On April 11, 2022, a case of a stolen child was reported to the Command by one Okeh Nkemdiri ‘f’ against one Uchechukwu Ebenyi, age 27-yrs ‘m’ of Amukpa Okengwu Ezilo in Ishielu LGA of Ebonyi State.

“Nkemdiri alleged that on March 21, 2022, at about 1200 hours, she went to their local market with her four-year-old son, Okeh Makuochukwu, whom she suddenly discovered was no longer seen.

Back to Top
Close
X
EFCC nabs ‘Yahoo-Yahoo’ academy owner, 16 ‘trainees’ in Abuja…Crime SceneChannelsOperatives of the Abuja Zonal Command of the Economic and Financial Crimes Commission (EFCC) have arrested one Afolabi Samad, the owner of a ‘…