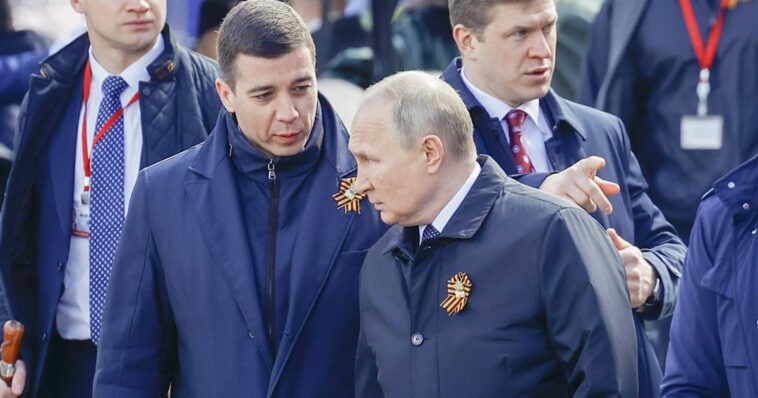 With growing doubts about Putin’s health, a little known Kremlin aide named Dmitry Kovalev is being tipped by Kremlin-watchers to take over as the ailing Russian leader’s successor.

There’s continuing speculation that Russian leader Vladimir Putin is suffering severe health problem as rumours over a potential successor now have eyes on a young mystery man he was close with at the Victory Day parade.

He has appeared unsteady and weak in recent pubic appearances, and sparked further speculation when he missed an ice hockey match that has been a regular date in his diary for a decade.

But If Putin were to step down – or be ousted – the big question is who would replace him?

In the short term Mikhail Mishustin, the Prime Minister, would automatically assume power if the leader died or became incapacitated.

But Kremlin watchers are tipping Dmitry Kovalev as a possible future leader. Kovalev, a member of the Presidential Administration, appears to be one of the few people that Putin trusts.

Russian news source Baza (Base) posted on Telegram that Kovalev, 36, seemed to be very friendly with Putin at Monday’s Victory Parade in Moscow.

“Baza found out the identity of a young man who talked about something with Vladimir Putin after the end of the Victory Parade,” the post read.

“During the live broadcast, the camera caught their conversation. Some Telegram channels suggested that the young man is a future successor”.

Kovalev is known to be a big ice hockey fan, and there’ speculation that the two men could have bonded over their mutual love of the sport.

Another potential successor could be Nikolai Patrushev. At 70, Patrushev is older than Putin but he was rumoured to have been selected as the President’s deputy in the event that Putin needed surgery.

Dr Sarah Whitmore, an expert in Russian domestic politics at Oxford Brookes University, predicted that there could be moves within the Kremlin to select the “winner” of the next presidential election, and that Patrushev is one of the most likely contenders to succeed Putin.

Dr Whitmore said: “If Putin were to suddenly die from an illness then people would have to be told and there has to be a sort of succession organised.

“Someone we know like Shoigu, he’s been touted as a potential successor and seen as a popular and acceptable face”

But she added that the next leader could be a complete unknown “who may even be more hardline”.

She said: “Where there seem to be expressions of discontent, it has tended to be critical that Putin isn’t going sufficiently hard in Ukraine and that he has been too gentle.”

Putin has said that he is actively looking for the next generation of Russian leaders.

in an interview with NBC, he said, “You know, I have linked my entire life, my entire fate, to the fate of my country to such an extent that there isn’t a more meaningful goal in my life than the strengthening of Russia.

“If anybody else, and if I see that person, even if that person is critical of some areas…