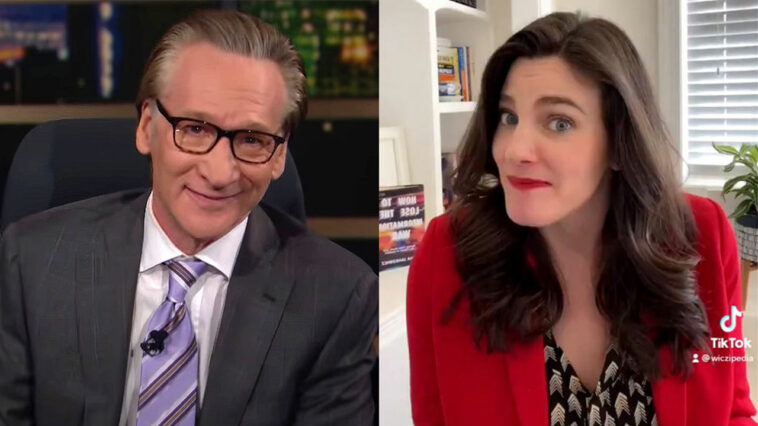 blasted the so-called “Disinformation Governance Board” and its executive director Nina Jankowicz.

During his panel discussion on Friday night, Maher knocked the Department of Homeland Security, which he said itself had a “creepy name,” for rolling out its new initiative, which he insisted is “even creepier.”

“Yes, they’re right to compare this to Orwell in the ‘Ministry of Truth,’ Maher said. “That’s exactly what it sounds like.”

After acknowledging that he was “alright” with the DGB’s mission to go after disinformation from Russia and migrant traffickers, Maher took issue with the DHS’s definition of “disinformation,” which is “false information that is deliberately spread with the intention to deceive or mislead.”

“Well, you could have said that about ‘If you like your doctor, you can keep your doctor,’” Maher reacted, referring to President Obama’s infamous claim about Obamacare, which was declared “Lie of the Year” by PolitiFact. “It said also, here’s a phase, ‘can take many forms.’ Okay, now we’re going faster down the slippery slope, ‘including but not limited to’ the two I mentioned… okay, so government should not be involved in deciding what’s true or not true!”

“Because a lot of people are saying and my follow-up question would be, ‘Who do you think the truth czar is going to be in 2025?’ Maher added.

Former Rep. Jane Harman, D-Calif., who says she’s on the DHS advisory committee, knocked the DGB, telling Maher “I don’t get this piece” and that she was never consulted about it before the rollout. She added that the board would be “fine” if was “confined” to narrow missions but broadening their authority “would be highly unfortunate.”

Maher then pointed to remarks Jankowicz previously said about wanting to “essentially edit Twitter” to “add context to certain tweets.”

He added, “These are not bright people in our government.”

Last week, Maher closed his show with a monologue decrying censorship on the internet.

“This idea that we can clean up Twitter and project you from fake news and disinformation- it’s so ridiculous,” Maher told his audience. “People always lie. That’s what people do. Every age is the misinformation age. And whenever a new means of communication comes along, some reach right for the censor button. In 1858 The New York Times thought we couldn’t handle the transatlantic telegraph. “They said it was ‘superficial and too fast for the truth.’”

“Lies are all around you develop a better bullsh– detector. That’s a better solution than me giving up what I’m allowed to read. Who decides that? Who decides what gets the ‘no evidence for that’ sticker slapped on it?” he later asked.

“Sometimes misinformation is just history’s first draft. I see a lot of things on social media and also old f—‘s media and I don’t completely believe any of it not right away. Not until I check it out. And when I ask is it true, usually the answer turns out to be ‘Well, sort of’ or ‘Yes, but.’ So you see, we’ve all become very adept at saying things that are technically true but lack context or that leave out half the story. So if we’re gonna ban untruth, does that include the half truth, the quarter truth, and wait, don’t the wokest people in the world believe that what really matters is ‘your truth?’”

“This is still America where people have the right to express what they think including to be wrong to lie and yes, the right to be an a—–. And if you think you know everything and no one else could possibly have some other truth, you should be glad for that protection, because you’re an a——,” Maher added.

The post Bill Maher rails against Nina Jankowicz, ‘Disinfo Governance Board’: ‘These are not bright people’ appeared first on Fox News.

Back to Top
Close
X
Gas prices just set another record, with no end in sight…United StatesBGR If you’ve filled up your car, oh, anytime in the last few weeks, this won’t come as news to you. The long shadow that inflation is casting over th…

Bill Maher rails against Nina Jankowicz, ‘Disinfo Governance Board’: ‘These are not bright people’