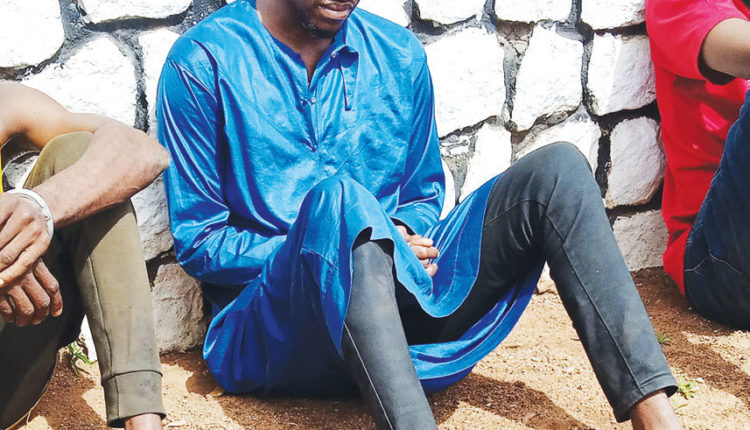 Son of a retired Army Major, Olagunju Ab­dulfatai Tijjani, has confessed to stealing his late father’s British issue pistol and used it to kill three people whom he claims to be of a rival cult group so as to enhance his status in Eiye Confraternity.

Tijjani is one of the sus­pects paraded on Friday by the Nigeria Police, Kwara State Command, as part of its updates in crime bursting operations in the state.

Speaking to journalists in Ilorin at the state headquar­ters, Tijjani said that he killed three people from rival cults and also admitted that the fit enhanced his position in his confraternity, making him number one, up from number two status where he was.

He also claimed to have stolen a British issue sidearm from his late retired army fa­ther.

“With it, I killed three peo­ple whose only offense was that they were of a rival cult.

“I was a 500-level Univer­sity of Ilorin student until I dropped out,” he added.

The suspect, though told the police that the multiple murder weapon is no longer in his custody, he also con­fessed, according to police sources, that he had to sell some of the bullets to fellow cultists at N20,000 per bullet.

Giving a vivid account of events surrounding his arrest, Ajayi Okasanmi, SP, spokesman of the state command of the Nigeria Police, said that on April 28, at about 11: 00, Tijani was picked up on suspicion by eagle-eyed po­licemen on sur­veillance patrol.

He was arrest­ed for belonging to a gang of thieves.

“Investigation into his activities revealed that he is a member of a secret cult.

“The suspect confessed that he belongs to Eiye confraternity, and he is the number 2 in Ilorin zone.

“He stated that, during one of the cult’s esca­pades, himself and the other suspects, names withheld (for now for investigative reasons) at large, armed with one En­glish Pistol and a locally fabri­cated pistol went and attacked and killed one Ismaila Alabi,

aka, Abbey, a barber at his barbing shop in Agbooba area of Ilorin on 21, April this year,” the police spokesman said.

It was learnt that Tijjani further con­fessed that sometime in February 2021, he had also shot and killed one Emmanuel (surname unknown), a student of Human Kinetic Education, University of Ilorin, in a bid to fast-track­ing his ascension to the top position in his cult group.

“Upon inquiry as to the source of his weapons, he con­firmed that he took possession of his late father’s pistol, (a retired Army Major), which he used in the killings he participat­ed in.

“The pistol, ac­cording to him, is currently with a member of the Eiye cult group presently at large.

“Investigation into the matter is ongoing for pos­sible arrest and prosecution of the suspects,” the police officer said.

This article originally appeared in the Independent

I stole my late father’s pistol, killed three to emerge number one in Eiye Confraternity - Cultist