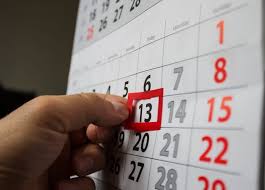 Today is Friday the 13th. Here’s why so many people think the day is cursed.

If you count yourself as one of them, don’t worry, 2022 has only one Friday, the 13th. Some years can have up to three. And next year, in 2023, there will be two in January and October.

The reason why Friday the 13th incites so much trepidation is that it has a long history of being related to bad omens.

Why is Friday the 13th unlucky?

In Christianity, the crucifixion of Jesus Christ occurred on Friday the 13th (Good Friday). Meanwhile, the Last Supper had 13 attendees, the 13th being Judas, who betrayed Jesus. Friday the 13th is also believed to be the day Adam and Eve consumed the “forbidden fruit,” Cain murdered Abel, the Temple of Solomon fell and the day Noah’s ark traversed the Great Flood.

During the Middle Ages, King Phillip IV of France tortured the Knights Templar on counts of heresy and sexual depravity on Friday the 13th in October 1307. In the U.K., however, Fridays were linked with capital punishments like public hangings, where subjects walked 13 steps to the gallows.

But the superstition surrounding the day may go even further back. According to CNN, in Norse mythology, the god of mischief Loki tricked the blind god Hodr into shooting his brother, the god of light Balder. Loki was able to do this by sneaking into a dinner party at Valhalla, where his presence made the number of guests 13.

The myth spread throughout Europe, and when Christianity was being forged, it’s believed the Norse myth shaped the story of the Last Supper and Good Friday.

Another theory is that Friday the 13th was heavily associated with luck-bearing goddesses in paganism. When Christianity became the dominant religion, the powers that be did their best to turn positive pagan symbols into unlucky ones and to demonize pagan elements that elevated women.

“As Christianity gained momentum in the Middle Ages, however, paganism stood at odds with the new patriarchal faith,” according to CNN. “Not only did its leaders take objection to the worship of multiple gods and goddesses, but the celebration of Friday, the number 13, and the goddesses who invoked love, sex, fertility, magic and pleasure were deemed unholy.”

In popular culture, movies like Friday the 13th only served to further make the day seem scary to the general public.

It’s likely there’s no real reason to be afraid of the day, but if you’re superstitious, who can blame you when people have been fretting about the day for centuries?

The post Why is Friday the 13th considered unlucky? appeared first on In The Know.

Back to Top
Close
X
Calling a man 'bald' is considered sexual harassment, tribunal rules…Last PostBy Lucy ThorntonThe ruling comes in a case between a veteran electrician and his employers. Tony Finn, 64, claimed he had been a victim of sexual hara…

Why is Friday the 13th considered unlucky?

X
To bathe or not to bathe (often). That is the question…Last PostCNN's Harry Enten wonders if he and the roughly two-thirds of Americans who shower once a day have it wrong? What if bathing every day is not the best…