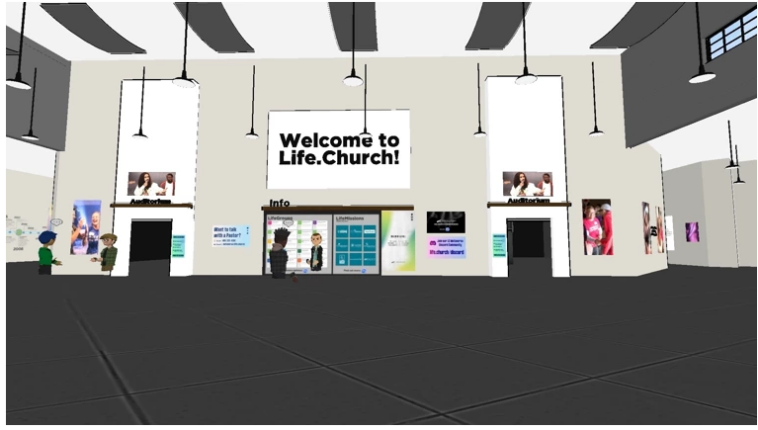 After investing more than $300 to purchase the Meta Quest 2 (previously Oculus Quest 2) VR headset, creating an avatar as close as possible to my likeness, and dressing in my best virtual clothes, I went to church with just a few clicks.

I visited the virtual campuses of several churches between Saturday and Sunday. The process was so easy, it was like picking a movie to watch on Netflix.

I’m sharing my experience at three of these churches where I had some interaction or spent a meaningful amount of time. They are: Life.Church, Lakeland Community Church, and Faith Church. I accessed the VR campuses of all the churches through Altspace VR, a social VR platform owned by Microsoft.

I had planned to access the VR world through another online VR platform called VR Chat but I got stuck trying to make the platform accept my personally created avatar so I abandoned that ambition. I was able to get started quite quickly with AltspaceVR using my Microsoft account.

I quickly made my way to the auditorium and found close to 10 or so people listening to the church’s worship service streaming on cinema-like screens. I observed for a while before taking a few virtual photos and heading to my seat. Other avatars — the virtual representations of real people — moved in and out of the auditorium.

Groeschel would soon introduce guest Pastor Herbert Cooper of the People’s Church, who delivered a pre-recorded message on “When you feel abandoned by God.”

A woman with a blonde avatar sat in the row behind me. She would say amen from time to time as Cooper preached. I sometimes lifted my own virtual hands in approval or when the pastor asked the church to pray. When the service was over, the VR campus Pastor Steven Roberts introduced himself to the group, then he spoke with some people individually. We chatted briefly and he invited me to return the following week.

Before I left the campus I walked around the building a little and found that there were many rooms and spaces set up for perhaps an expansion of virtual activity at the church.

As soon as I entered the VR campus of Lakeland Community Church on Sunday, I was greeted by a staffer named Kim who told me where to go and what to look out for. There was a lot of information on the virtual walls of the building and there was a nice waterfall that you could watch as you entered and exited the auditorium. The waterfront campus, where Stuart McPherson serves as pastor, seemed thoughtfully created.

When I entered the auditorium, Senior Pastor Josh Amstutz’s live sermon was streaming on the screen. At one point I was the only one in the auditorium. You didn’t need to be inside to hear Amstutz speak due to the high volume setting on the livestream, so I spent more time exploring the VR waterfront than listening to the message.

For the Missouri headquartered Faith Church which I visited on Sunday evening, their VR campus wasn’t as creative as the campuses of Life.Church or Lakeland Community Church. It appeared to be a generic AltspaceVR auditorium with minor modifications. Pastor Obed Martinez preached a message about your condition not being your conclusion. A few people milled in and out of the virtual space until his sermon was over. I waited to see if anything would happen but nothing spectacular did.

For the most part, once you get beyond the VR, everything about church in the metaverse felt familiar. There were overt and not so overt invitations to give generously. There were signs inviting you to join a number of small groups, and then there was preaching.

I noticed that some people would come into the VR church space and look for a while then leave if they found nothing compelling. In a physical church, leaving a service you didn’t find interesting would not be as easy due to social pressure. In the metaverse, because you’re in avatar state and aren’t necessarily reflecting your true name in your profile that others can easily view before deciding to talk to you, that social pressure is almost non-existent.

The awareness that there could be a more useful church experience a few clicks away also helps to drive this transient attendance in the metaverse church. The only thing you have to do is go back to the menu of live services and choose the service you find most interesting for the day. If you find a community there then perhaps you’ll keep going back even if the message isn’t great.

In his presentation at the recently held Metaverse Church Summit, Bill Willenbrock, a hospital chaplain who has been leading a Christian fellowship on VRChat for about three years, noted that most of the people he has ministered to in the metaverse are particularly young adult males.

While a majority of the small audience I observed in the VR churches was also male, it didn’t seem to me like the audience Willenbrock referenced in his presentation would be interested in experiencing traditional church engagement in VR because their many questions about God in our increasingly pluralistic culture would still be left unanswered.

Last year, a survey from Probe Ministries, a nonprofit that seeks to help the Church in renewing the minds of believers with a Christian worldview, showed that nearly 70% of born-again Christians disagree with the biblical position that Jesus is the only way to God.

The survey, which looked at religious beliefs and attitudes toward cultural behaviors, polled 3,106 Americans ages 18 to 55 from all religious groups, including 717 respondents who identified as born-again Christians.

The survey also found that among the top reasons given by born-again Christians for not telling others about their faith is the acceptance of pluralism. When asked why they don’t share their beliefs with others, born-again respondents chose “They can get to Heaven through their different religious belief,” “We shouldn’t impose our ideas on others,” and “The Bible tells us not to judge others” as their top three responses, respectively.

A day before attending the VR church services, I found myself in a general faith forum in the metaverse where people from many faiths had open discussion.

I stumbled upon a large group listening to a debate between a Christian man and a Muslim woman who used to be a Christian. I soon discovered there were many former Christians in the room including those who had converted to other faiths or no belief in God at all.

Soon I was getting all kinds of questions from different people asking me why I believed in Jesus after I declared my faith. I shared that I believe because I had a personal encounter with God that lines up with the Bible. I also explained that I have proven from my lived experience that the spiritual principles contained in the Bible are true.

Two men who identified themselves to be in their mid to late 20s told me that they have been trying to hear from God for a long time but all they have heard back is silence.

A Muslim man offered to use logic to prove to them that God exists. I listened and waited as he struggled and ultimately failed to convince them.

I told them I wouldn’t try to use logic to prove that God exists because God is beyond human logic. I told them all I could do is be a witness to how God has moved in my life and trust that they will seek after Him and find answers themselves. They listened but said they were frustrated that God never answers them.

I urged them to keep seeking and praying and be patient. I told them about the Holy Spirit. We talked about Nicodemus coming to Jesus by night in the book of John. The conversation was robust but respectful and lasted for at least a couple of hours as people moved in and out of the conversation.

Despite all my testimony, one of the two young men said he still had not been convinced that God exists. I told him it was OK, then asked him if I could pray with him. He said yes and I prayed for about two minutes.

He asked me again why God doesn’t speak to him the way He speaks to me. I asked him how does he know that God hasn’t been trying to talk to him through our conversation. He said he wanted a personal visitation from God. I told him that no human flesh can stand in the presence of God and live.

In the end both non-believers sent me friend requests. I accepted fully realizing that it had been a very long time since I was asked so many questions about what I believed and why. And even though the young men said they weren’t yet convinced that God exists, I know that God made a connection with them through our conversation because they opened the door to keep listening.

Back to Top
Close
X
Adeshola Cole-Alegbe: Battered by racism, humiliated by foster parents, now 2022 Emerging CEO of the…Special ReportLife and times of only black girl in her UK community; maltreated at home by wicked foster parents, beaten up in school because of her looks, labeled …

X
How the metaverse will change cryptocurrency; could be worth $13 trillion by 203…MetaverseBy Daniel Levi The popularity of the Metaverse has taken the internet by storm since Facebook changed its name to Meta in October 2021. The talk about…