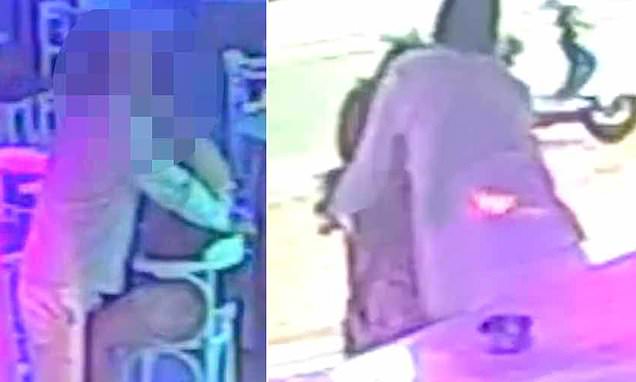 This is a British father and daughter seen having a boozy night together in a bar in Greece just hours before he was arrested for raping her.

Greek officials insist that CCTV footage from the bar proves their case that the father, 62 indulged in ‘inappropriate sexual activity’ with his daughter, 33, while they were drinking heavily in the popular resort town of Malia in Crete.

He is accused of then raping her in a deserted alley way after they left the bar in the early hours of the morning last Thursday.

The father and daughter cannot be named for legal reasons, but he denies the accusations and she is supporting him, insisting that he is ‘100% innocent.’

CCTV footage of the father and daughter from which these stills are taken appears to be inconclusive. The footage, obtained by MailOnline, was taken shortly before 4am last Thursday.

The daughter, who has continually protested her father’s innocence, had previously claimed that once all the CCTV evidence was gathered it would prove her father ‘was back in the hotel when I was attacked’.

The clip shows the woman slumped on the bar while seated in a stool as the father repeatedly appears to go over to speak in her ear. He also attempts on several occasions to get her up, which she resists.

At times during the footage, they are filmed locked in a number of tight holds and the father is also seen falling to the floor after the woman appears to push him away while she also stumbles after slipping off the bar stool.

Despite the indeterminate nature of the video, Greek police officials insist that it is a key part of their case against the father and believe it shows sexual contact by the man on the woman.

Captain Sofia Loverdos of Crete police told MailOnline: ‘The video is vital to this case. The man touched the woman inappropriately, attempted to kiss her and also hit her.

‘The woman denies this, but the CCTV footage shows something different.

‘This is a crime of rape and domestic violence and we are obliged to pursue it under Greek law even if the victim insists that the alleged perpetrator is innocent.’

She added: ‘We have also gathered CCTV from the surrounding area and statements from eyewitnesses. They show that the man and woman continued arguing after leaving the bar – and that they were together at all times. There was nobody else involved.’