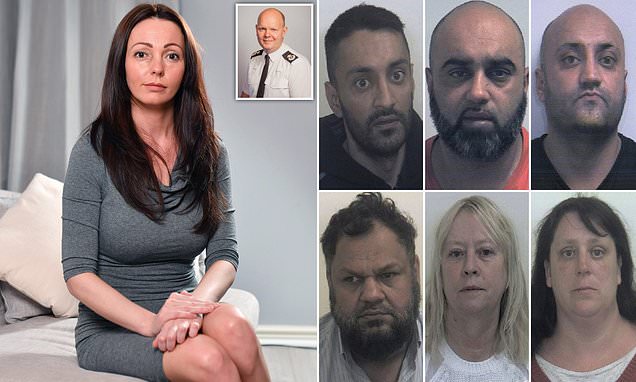 A survivor of Rotherham grooming gangs claims she has been ‘raped by the system’ after a report into the scandal revealed almost 50 police officers all kept their jobs despite looking the other way as 1,400 girls were abused, trafficked and groomed.

Sammy Woodhouse, 37, was left ‘disgusted’ that ‘not one professional will be held to account’.

She was sexually abused as a teen by ringleader Arshid ‘Ash’ Hussain and bravely waived her anonymity as a rape victim to expose the paedophile gang.

The long-awaited investigation by the police watchdog – which took eight years to publish and cost £6m – found officers in South Yorkshire ‘failed to protect vulnerable children’ following a series of offences carried out between 1997 and 2013.

A total of 47 current and former officers were investigated by the Independent Office for Police Conduct (IOPC) – but none were fired, despite 265 separate allegations being made by more than 50 complainants.

The IOPC’s investigation catalogued how children as young as 12 were seen as ‘consenting’ to their abuse by officers, who were told to prioritise other crimes.

It comes just days after officials at Oldham Council and Greater Manchester Police apologised for failing to protect victim of grooming gangs in Rochdale around the same time.

The report was met with an outcry of fury from campaigners and current police chiefs, who admitted victims had been let down.

Ms Woodhouse,  who waived her anonymity, told the Sun: ‘I’m disgusted that not one professional will be held to account.

‘Thousands of children and families have had their lives ripped apart. This has left me feeling like I’ve been raped by the system.

‘Life should be hard for rapists, not us. They get all the rights, we get none.’

Meanwhile, the father of another survivor told the Mirror of his anger that there was no criminal proceedings launched against officers, even though he was previously arrested himself for breaching the peace as he tried to rescue his daughter.

He said: ‘It is the biggest disgrace I’ve ever known. It’s insulting to every single girl and family member.

‘They’ve just turned a blind eye like everyone else. I find it very very sickening and absolutely atrocious that we have not seen any justice for this at all.’

Locals in the town also expressed their disgust, including sisters Danielle Holmes and Tammy Frail.

They told the BBC: ‘The police didn’t do a good enough job to protect people.

‘We know a couple of the victims and we know they didn’t get the full support that they probably should have received. I bet they feel like they were punished, not the police.

‘If you’re going to the police for help, they should help you. It doesn’t make you feel safe when they only get a final written warning.’

The IOPC report detailed how one parent concerned about a missing daughter said they were told by an officer ‘it was a ‘fashion accessory’ for girls in Rotherham to have an ‘older Asian boyfriend’ and that she would grow out of it’.

The document revealed how the watchdog upheld a total of 43 complaints made against the force. These blunders included:

Rotherham victim 'disgusted' as 'not ONE professional held to account'