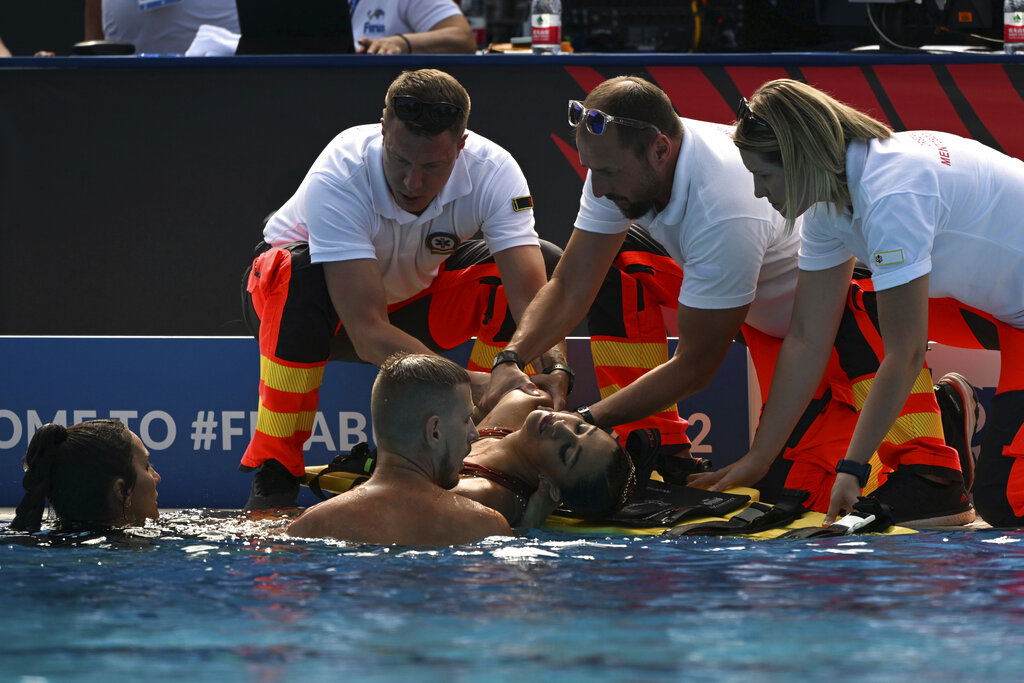 U.S. swimmer Anita Alvarez was rescued from the bottom of the pool by her coach after she fainted while competing at the FINA World Aquatic Championships in Budapest, Hungary, according to Reuters.

Coach Andrea Fuentes jumped into the pool after she saw the 25-year-old artistic swimmer sink to the bottom at the end of her routine in the women’s solo free event on Wednesday.

Fuentes lifted Alvarez to the surface, and another U.S. swimmer helped bring her to the edge of the pool.

Alvarez, who competed in synchronized swimming at the 2016 and 2020 Olympics, received medical attention beside the pool, Reuters reported, and was then carried off in a stretcher.

It was the second time Fuentes has had to rescue Alvarez, according to Reuters. The athlete also fainted during a duet competition at an Olympic qualification event last year.

Speaking to Spanish broadcaster Cadena COPE in a radio interview, Fuentes said the lifeguards didn’t react quickly enough on Wednesday, which is why she jumped in.

She said: “When a swimmer finishes their routine, the first thing they want to do is breathe and so I saw that instead of going up, she was going down and I told myself, ‘Something is going on,’ and I called for the lifeguards, like, ‘Go into the pool, can’t you see she’s going down in the water?’

“And they weren’t reacting, so after a couple of seconds, I went in as fast as I could.

“I don’t think I’ve swum as fast ever before, even when I got Olympic medals and, well, in the end, I was able to get her up and she wasn’t breathing … In the end, everything came out OK.”

U.S. swimmer faints during world competition; coach dives in to rescue her