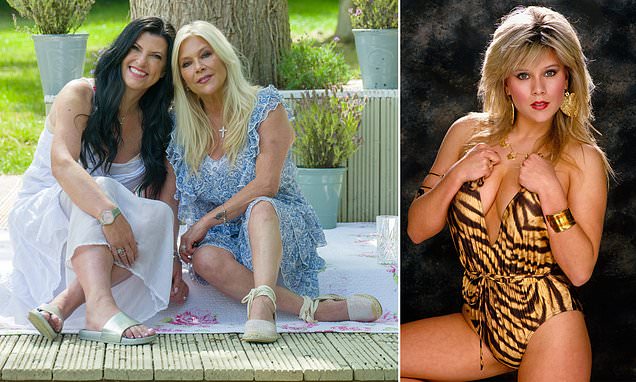 Eight years after they met, six years after they became a couple and two years after Covid postponed their first wedding, Sam Fox and Linda Olsen finally got married in an Essex hotel last week. Let the bells ring out! It was quite a day.

Sam and her Norwegian bride had matching glitter manicures and exchanged identical diamond baguette wedding bands. They cried when they saw each other in their jewel-encrusted white gowns from David’s Bridal in Stratford, East London, and they loved being attended by their eight bridesmaids in blush gowns to match the rose bouquets in the pink-hued ceremony.

During the Eurovision-themed party, both brides drank non-alcoholic wine — what Sam calls ‘virgin prosecco’ — so they wouldn’t miss or forget a single thing, forever and ever, amen. Newspapers reported on every detail of the knees-up, from the performance by the pop group Bobbysocks to the three-tier wedding cake.

‘And at the end of it all I was absolutely gutted,’ says Sam. Why? ‘Because one newspaper said I was 57 and I am only 56,’ she shrieks.

Still, there were moments when the former Page 3 model and singer admits that she did feel her age. ‘At one point, someone said to me, ‘Where is the afterparty?’ Hello? Whatcha talking about? I told them, ‘My feet are killing me, you know? It is time to go home.’ ‘

Today, at their detached, three-storey property in East London, the happy couple are still on a post-wedding high — although a cancer scare has put a hold on their happy ever after and might even delay their honeymoon plans to go on an African safari.

For Sam is to undergo a throat operation within days, after doctors found a 1 cm growth on her vocal cords. ‘It is the size of a petit pois,’ she says. ‘Or a sweetcorn.’

She noticed her voice getting hoarse before Christmas but put it down to dust caused by building work being carried out at home. When it persisted, she sought medical opinion and doctors have advised removal rather than a biopsy, although it runs a risk of scarring and possible damage to her singing voice.

‘I believe if you have enough people praying for you all over the world, then I will be healed. I really just hope so. You know, I believe in that. I am staying positive.’

Back to Top
Close
X
Mad theories say Elvis is still alive – from bushy beard to pool house pic…EntertainmentThe King of Rock and Roll has been resurrected on the big screen as Baz Luhrmann's new musical extravaganza Elvis, which centres on the singer's rise …

X
“You are a nobody” – Angry Zambian fans drag Kizz Daniel for rejecting a flower …EntertainmentTooxlusiveNigerian singer Kizz Daniel has stirred mixed reactions online, after refusing to collect a flower bouquet at the airport in Zambia.In the v…