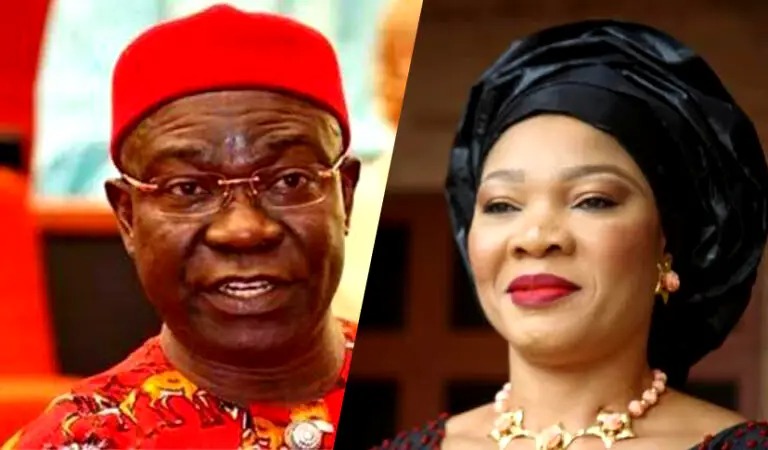 The Igbo Youth Council, IYC, has again waded into the raging controversy over the detention of former Deputy Senate President, Ike Ekweremadu and his wife Beatrice.

It was reported that the couple are being held in the UK for charges bordering on alleged organ harvesting.

The group had earlier pleaded for caution and an end to the social media trail of the Senator.

The group has now written an open letter to the UK Embassy, begging that at least the Senator’s wife be freed to enable her attend to their ailing daughter.

In the appeal made available to journalists on Sunday, the group said it was now clear that the Ekweremadus did not involve themselves in any untoward deal but had followed an established process to save the life of their daughter.

The letter of appeal was signed by Igbo Youths President-General, Mazi Okwu Nnabuike and the Secretary-General, Obinna Achionye.

“Following more emerging revelations in the case involving the former Deputy Senate President, Senator Ike Ekweremadu and his wife, both true son and daughter of Igbo land, we find it expedient to make this open appeal to the UK Embassy in Nigeria.

“Contrary to earlier reports which flooded the media, it has become clear that the couple had no bad intention in mind.

“Having seen that they had no other intention rather than to save the life of their daughter, as nobody will sit by and watch their child die without making efforts, we deemed it necessary to make this appeal.

“We plead with the United Kingdom, through its Embassy here in Nigeria, to look into the implication of detaining the husband and the wife. We appeal for the release of one of them so that the person can take care of the sick child who needs medical help urgently,” the group wrote.

Meantime, the leadership of Ohanaeze Ndigbo led by Prof George Obiozor has devoted in prayer, the family of Senator Ike Ekweremadu on their present travail, following the kidney ailment of their daughter, Sonia.

Ohanaeze asked the general public to disregard some remarks making the rounds to the effect that it disowned the former deputy President of the Senate and his wife, Nwanneka over their ordeal in the United Kingdom.

National publicity Secretary of the group, Alex Ogbonnia in a statement yesterday, said that while Ohanaeze Ndigbo owes it a duty to stand with its own, especially in times of difficulty, it is not in their character to be hasty with statements over issues without sufficient facts.

Ogbonnia noted that eminent Igbo patriots had at one time or the other, pleaded with impostors and pretenders to desist from reckless and unguarded statements that portray the Igbo in a bad light using the platform of the apex Igbo socio-cultural organization, the Ohanaeze Ndigbo Worldwide.

“For purpose of clarity, the President General of Ohanaeze Ndigbo is Ambassador Professor George Obiozor while the Secretary-General is Ambassador Okey Emuchay, MFR.

“Amongst the Igbo, it is a cultural anathema to rejoice over a brother’s misfortune. And this is where the remarks by Mr. Peter Obi, the Presidential candidate of the Labour Party, is very germane and instructive. This is an over-reaching agelong Igbo moral,” Ogbonnia commended.

The Ohanaeze Ndigbo further commended Giver Dave Umahi of Ebonyi state for his intervention to ensure that emotions and social media tigritude do not outweigh the facts in the matter.

“Our hearts go to our daughter, Miss Sonia Ekweremadu; and it is our fervent prayer that Senator Ekweremadu, Lady Nwanneka Ekweremadu and family will overcome over the current travails,” Ohanaeze sympathised.

They also slammed fifth columnists who they said had gone on to create pseudo accounts with the name of the alleged victim of organ harvesting, David Nwamini.

IYC said, “we observed that within the…

Back to Top
Close
X
Between Apero and Ilana OoduaIn the NewsThe Nation Online By Olakunle Abimbola Intellectualizing the Yoruba state in the Nigerian union got a boost, with the dawn of the Apero caravan of wee…

X
2023 presidency: What I discussed with Obasanjo – Ango Abdullahi…In the NewsThe Chairman, Northern Elders Forum, Prof Ango Abdullahi has said Nigeria’s political situation was the major issue that dominated his discussion with…