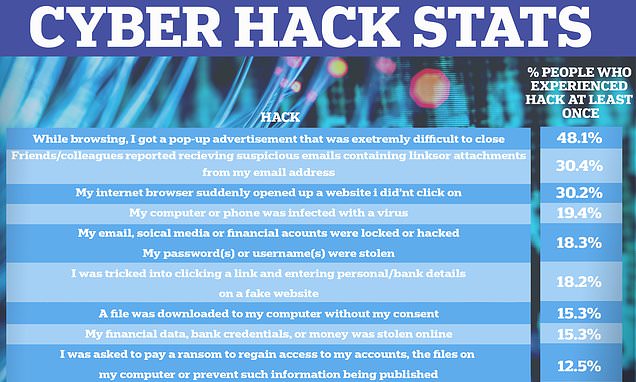 Cyber criminals are on a hacking rampage across the UK of ‘epidemic proportions’, new research warns, with an average of 330 Britons a minute suffering some form of cyber attack.

The shocking statistics, which convert to a Brit being hacked every 0.2 seconds, came from Nord VPN, who said that most people do not even realise that they have experienced a hack at all.

Hacking attempts have become so commonplace that the average person suffers a cyber attack of some kind three times a year.

More than one in ten people in the UK, according to the research, have in the past 12 months suffered theft of money, bank credentials or financial data from organised criminals and fraudsters who have brought their dark arts online.

A similar number were asked to pay a ransom to regain access to their accounts, files or to stop such information being published online.

Disturbingly, given the huge rise of video calls over the past couple of years, one in twelve had experienced hackers gaining control over their computer’s webcam.

Back to Top
Close
X
Sex education is 'driving pupils to identify as trans', MPs told…Last PostSex education is fuelling the huge rise in the number of children who think they are transgender, an MP has claimed.In a Westminster Hall debate yeste…

Cyber-criminals are hacking an average of 330 Britons A MINUTE

X
Would you take ten grand in cash to give up your seat on a plane?…Last PostHotairThe cost of a seat on a commercial airline has been going up a fair bit lately, though not as quickly as the inconvenience and frustration level…