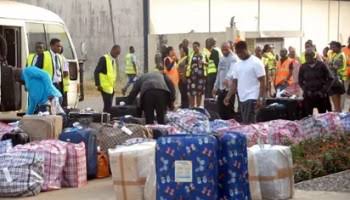 A flight chartered by the United Kingdom Government, carrying at least 30 Nigerians and eight Ghanaians has today, landed at the Murtala  Muhammed International Airport, in Lagos.

This came as the U.K. announced a “major new agreement” with Nigeria to collaborate on migration issues, following similar arrangements with Ghana and Rwanda.

The flight is operated by Portuguese charter carrier Hi Fly.

Typically, a deportation order is made when a foreign national is convicted of an offense and sentenced to at least 12 months.

It is unclear why exactly the people on the plane were deported, though the Home Office described 11 of those removed as “foreign national offenders” and 10 as “immigration offenders.”

There was no available information about why the remaining deportees were deported.

Earlier, protestors gathered outside the female-only Derwentside Immigration Removal Centre in northern England to register their concern. The protestors demonstrated and shouted pro-refugee slogans as a bus, believed to have been carrying some of the deportees, left the center. Several protestors were arrested,..

Why 30 Nigerians were deported from UK