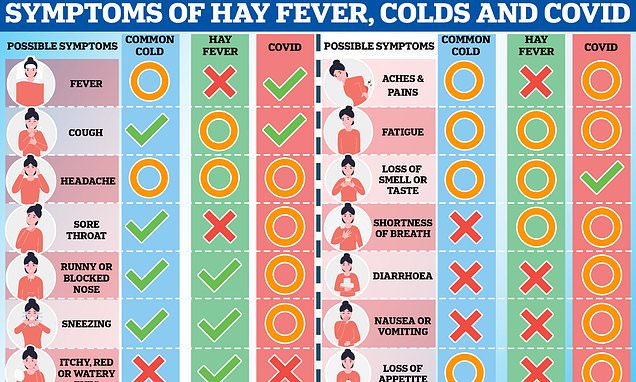 If you’ve suffered a bout of the sniffles over the past fortnight, you could be forgiven for assuming it was just a cold.

Or you could easily have pointed the finger at hay fever if you’re particularly prone, given Britain has repeatedly been battered by a pollen bomb.

But, as the pandemic has worn on, Covid itself has become much milder.

And with the virus once again sweeping the country, it means the symptoms that leave you stuck to the sofa with a box of tissues may have actually been triggered by Covid.

So, given all three illnesses can blight people in a similar fashion, here is the ultimate a guide to tell what’s really behind your runny nose, cough or aches and pains.

At the start of the pandemic, people were told to watch out for three warning signs of Covid: a loss of taste or smell, a continuous cough and a fever.

But as new variants evolved and vaccines and repeated waves blunted the virus’s threat, the official symptom list continued to grow.

According to the ZOE symptom-tracking study, the most commonly reported signs of the virus are now a runny nose (66 per cent), sore throat (65 per cent), headache (64 per cent), persistent cough (63 per cent) and fatigue (62 per cent).

But because of the range of symptoms and high prevalence of the virus, Professor Tim Spector, an epidemiologist at King’s College London who leads the study, encourages people to get a test anyway.

The virus is currently in its fifth wave in Britain, driven by the BA.4 and BA.5 sub-strains of Omicron, which are thought to be more infectious but just as mild as their ancestor.

Covid’s most unique feature is the loss of smell or taste completely, known as anosmia, which is rarely reported in colds and hay fever.

Harvard University researchers published a study in Science Advances in July 2020 showing the virus invades blood vessel cells and stem cells in the nose that provide energy to the nerves that transmit a sense of smell to the brain.

However, Omicron is less likely to cause the loss of taste or smell because the variant multiplies deeper in the lungs rather than in the nose, experts believe.

Back to Top
Close
X
Putin 'could fire Russian nuclear weapons from Belarus' as deployment agreed…World NewsAlexander Lukashenko claimed in a meeting with Putin’s foreign minister Sergei Lavrov that he was against war with the West, and saw the expected depl…

Are your sniffles caused by hay fever, a cold or Covid?