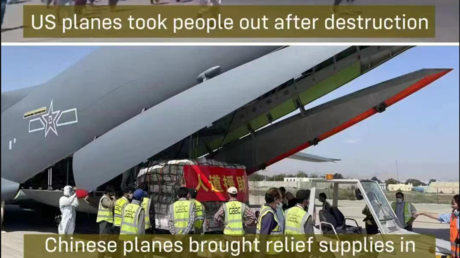 The same kind of planes the US used for its chaotic withdrawal from war-torn Afghanistan, China is now deploying to deliver supplies for rebuilding the country’s province stricken by a major earthquake, a spokesman of the foreign ministry in Beijing pointed out on Twitter on Friday.

“Similar transport planes, different missions in Afghanistan,” Zhao Lijian tweeted. He accompanied that with a screenshot captioned in English: “US planes took people out after destruction, Chinese planes brought relief supplies in for reconstruction.”

One of the images is the iconic photo of the US C-17 Globemaster III attempting to take off from Kabul in August 2021, surrounded by desperate Afghans trying to cling on. On the bottom is a photo of the Chinese Xian Y-20 transport, delivering pallets of aid last week.

China mocks US over Afghanistan