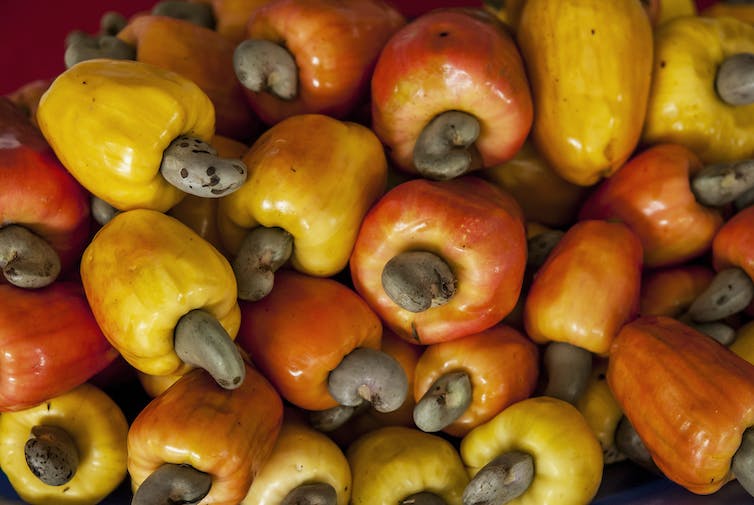 Nigeria – the sixth largest producer of cashew nuts globally – exports more than 80% of its raw cashews primarily to Vietman and India where they are processed into various consumer products such as butter, food and cosmetic ingredients.

But Africa’s most populous nation can extract more economic value out of cashews by using their wastes to produce citric acid.

Cashew is a tropical tree cultivated for its fruit (cashew nut) and pseudofruit (cashew apple). The nut is the major reason for planting cashew – it is very nutritious. The fleshy “apple” part yields a juice which is high in vitamins and minerals.

But the juice is high in anti-nutrients too. These are compounds that prevent the body from absorbing nutrients. They also make the juice less palatable. Because of this, cashew apples are mostly discarded.

The apple pulp, shell and liquid from the shell are all wasted or underutilised. Yet, these are valuable materials and they can be improved by biotechnology.

We used cashew from Ogbomoso, south west Nigeria, an area that produces some of the best cashew nuts in Nigeria.

Nigeria currently harvests 200,000 to 240,000 metric tons of raw cashew nuts each year, with about 85% of this exported. Nigeria’s no different to other African countries that export the bulk of their production as raw cashew nuts.

Africa, with production of 2,334,405 tons, is the world’s largest producer and exporter of raw cashew nuts, accounting for more than 50% of production. Between 2000 and 2018, world trade in raw cashew nuts more than doubled to 2.1 million tons, and African producers – led by Côte d’Ivoire – accounted for almost two-thirds of the growth. In 2020, trade in cashew nuts was worth US$6.87 billion.

Cashew farming contributes about N24 billion (about US$58 million) to the Nigerian economy annually. It employs more than 600,000 people.

The sector could do more. Our work shows that citric acid can be produced from cashew apple juice, which is abundant in Nigeria. Domestic production would save Nigeria US$31 million a year in foreign exchange, based on citric acid imports for 2020.

Nigeria can produce citric acid from cashew apple juice by using biotechnology – the science of using biological processes to produce valuable materials and services. For instance, man makes use of some bacteria to convert milk to yoghurt. Yeast is used in producing bread via biotechnology. Biotechnological products were valued at US$752.88 billion in 2020 with projected growth of 15.83% for 2021-2028.

Cashew wastes, too, can be turned to wealth by creating new products. For instance, cashew nut shell liquid produces chemicals that can be used in the making of paints, varnishes, agrochemicals and medicines. Shell and pulp are used through biotechnology to produce animal feeds and bioethanol. Biotechnology can also turn the juice into drinks and ethanol.

In our efforts to add value to cashew, we focused on the underutilised cashew apple juice and aimed to test the possibility of producing citric acid from the juice.

The demand for citric acid is growing because of its usefulness in food, pharmaceutical and cosmetic industries. New sources of nutrients are needed to grow microorganisms that produce citric acid.

Nutrients in the cashew juice and pulp support the growth of microorganisms.

We used cashew apple juice to grow black mould to produce citric acid for the first time globally. Black mould is a fungus that is widely distributed in the environment. It produces black spores when it grows. It is scientifically known as Aspergillus niger.

The mould grows on simple and cheap materials. It has been used to produce citric acid since 1919. It is used to produce different products, including enzymes, proteins and animal feeds. It is celebrated as a microorganism that has made huge contributions to biotechnology for 100 years.

The best locally sourced black mould consumed the juice to produce citric acid in large quantities. It produced 92.8g of citric acid per litre of juice after 10 days of growth. The yield is considered very high compared to those that were earlier reported.

We used the citric acid to coagulate soy milk to make cheese. Citric acid is used as coagulant in producing cheese. We asked a panel to test the quality of the cheese. They found the soy cheese to have better characteristics than those produced locally using fermented liquor of corn. These include better colour, texture, flavour and firmness.

At various times, we used four techniques to improve capability of the mould. These include obtaining high-yielding mould by exposure to radiation. Then, we added sugar to the juice to study its effect on yield of citric acid. We evaluated the addition of zinc oxide nanoparticles on citric acid production. Finally, we determined the best growth conditions to support citric acid production by our mould.