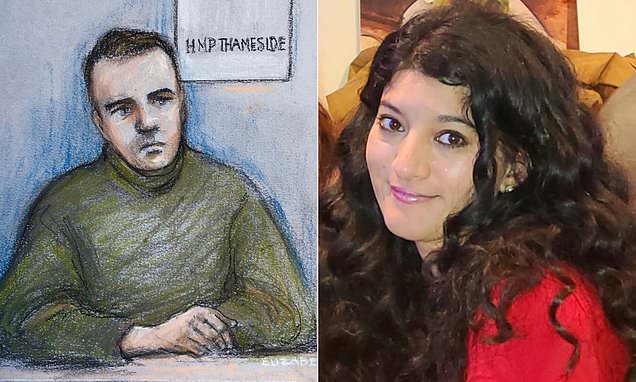 An alleged killer accused of beating aspiring lawyer Zara Aleena to death as she walked home from a night out was today remanded in custody after appearing at the Old Bailey.

Jordan McSweeney allegedly dragged the 35-year-old law graduate into a driveway on the early hours of Sunday morning and repeatedly stamped on her after trying to rape her, the court heard.

Police have said they believe Ms Aleena was the victim of an ‘opportunistic stranger attack’.

McSweeney, from Dagenham, east London, is also accused of robbing the law graduate of her mobile phone, keys and handbag, and attempted penetration without consent, the court heard.

He has been charged with murder, robbery and attempted rape.

Emergency services were called at 2.45am on June 26 after Ms Aleena was found bleeding and struggling to breathe with serious head injuries in a driveway in Cranbrook Road, Ilford, the court was told.

She was dragged onto the driveway – just 10 minutes from her home – before being kicked and stamped on, prosecutors allege.

During a hearing today, prosecutor Oliver Glasgow QC said: ‘The defendant has been charged in connection with the violent death of Zara Aleena who was attacked in the early hours of Sunday, June 26.

‘Emergency services were called after her body was discovered in a driveway in Cranbrook Road. She was bleeding, struggling to breathe having clearly sustained serious head injuries and she was also partially naked.’

A post-mortem examination revealed that she had suffered ‘multiple serious injuries’.

Back to Top
Close
X
I’m a flight attendant and there are 3 things you should NEVER bring onboard as you could make peopl…More NewsA FLIGHT attendant has warned passengers not to bring three specific items on to a plane - as it can fellow travellers feel sick. Cabin crew member Li…