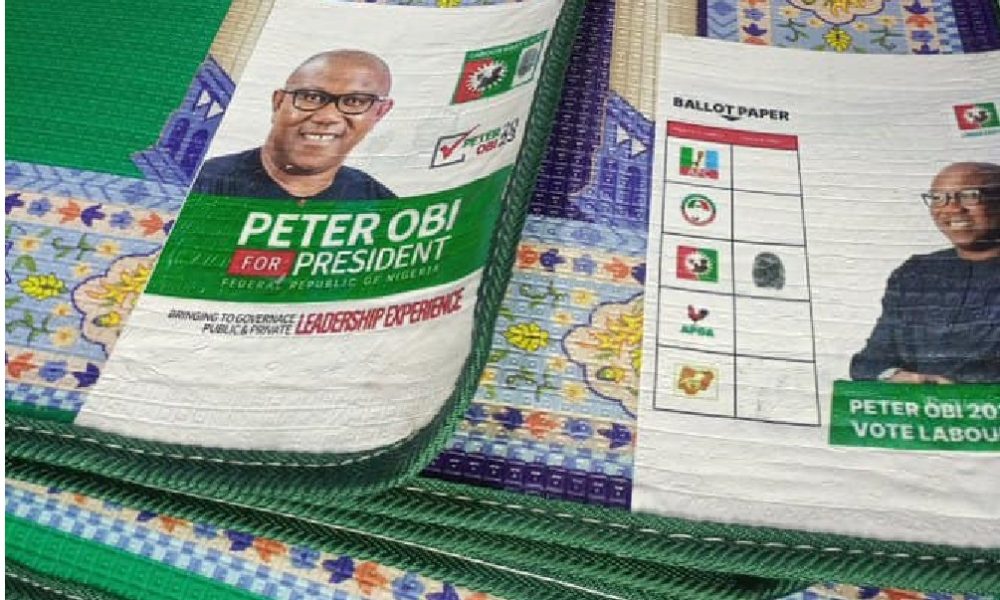 Reactions have trailed Labour Party presidential candidate, Peter Obi’s comment over a viral photo of his picture on praying mats.

Omokri who is a Christian condemned the act stating that the image depiction on the praying mats is against Islam ethics.

He thereby cautioned supporters of the presidential hopeful against the act.

Naija News understands that the viral post has attracted a barrage of reactions as some Northern Muslims via the microblogging platform criticised the support group of the Labour presidential candidate.

They further backed Omokri’s claim, saying it was wrong to hang anything portraying a human or animal inside a mosque.

Reacting to the development, Peter Obi in a Tweet on Friday morning disowned the campaign poster, adding that it was a misguided action by his support group.

Obi said he will never mock any religion or ethnicity as he deeply respects the Muslim faith.

“The inclusion of my picture on the praying mat by a support group was misguided, even with the best of intentions. It didn’t emanate from my campaign team. I have deep respect for the Muslim faith and indeed, for every other religion. We will never mock any faith, ethnicity or gender. We are one Nigeria. -PO” He wrote

Reacting, popular journalist, David Hundeyin [@DavidHundeyin] said Obi should stop trying to play the defensive game when he should be on the offensive.

He tweeted: “Dear PO, please stop apologising on behalf of your base. You are playing defence when you should be playing offence.

“Less “it wasn’t me,” more campaigning, please. This is a non-issue.”

Another netizen [@von_Bismack] wrote: “Always apologizing for nothing, abeg rest. People did something out of the abundance of their heart, if the effort can’t be appreciated, then good and fine. All these apologies will only weaken the zeal of the people that support you.”

On his part, Kelechi Ojinnaka [@orbiterP] admonished Obi to hire some experts to handle his campaign to avoid getting more backlash. He said: “Obama had a unit in the campaign HQ that supervised & trained…

X
2023: Tinubu Should Not Make The Mistake Of A Muslim-Muslim Ticket – APC Chiefta…Political LandscapeLatest Political News in Nigeria Today, 1 July 2022 A chieftain of the All Progressives Congress (APC), Sidi Ali has cautioned that a Muslim-Muslim ti…