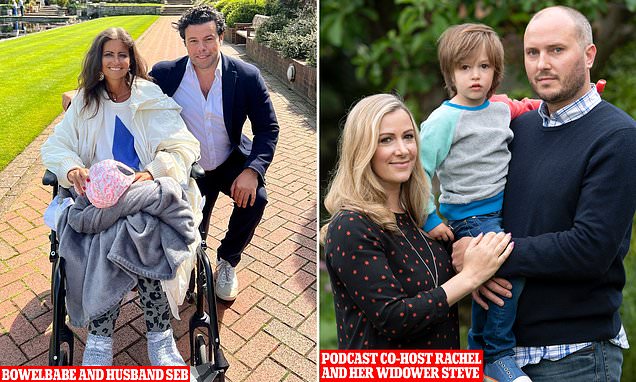 Tributes have poured in for Dame Deborah James this week, who passed away from bowel cancer at the age of 40.

Deborah, who was awarded a Damehood by Prince William in May, became known as Bowelbabe after setting up a fund to raise money for research into the disease.

It has now topped £7 million. But it was her podcast — You, Me And The Big C — which she presented with fellow cancer sufferers Rachael Bland and Lauren Mahon, that propelled her into the spotlight.

When co-presenter Rachael died in 2018, her husband, Steve, took her place, talking about the effects of caring for and losing a loved one from cancer. Here, Steve Bland pens a heartfelt letter to Deborah’s husband, Seb.

I have cried many tears for Deb — and the lovely family she left behind — over the past few days.

I know all too well the heartbreak you are enduring right now. As a husband whose beloved wife also died far too young, I wish I could impart some wisdom that would lift you through the agony.

I stumbled my way through the early months and I’m not sure there’s any other way to do it, when every day begins with the sickening realisation that the woman you thought you would spend your life with has gone and ends with you going to bed alone, having run another obstacle course of painful memories and emotions.

But amid all the gut-wrenching sadness — and you have to have lived through it to truly understand it — there is bound also to be relief that Deb’s suffering is, at last, over.

Whatever you need, I want you to know that I am here for you and your lovely children, just as I promised Deb I would be.

For Deb, always fantastically practical, was there for me after my wife, Rachael, died aged 40 — the same age Deb was when she died.

You and I have exchanged text messages often — mostly me checking how you are because I remember vividly everyone asking after Rachael and rarely how I was. But who could possibly understand the toll that nursing a loved one through a terminal illness takes if they’ve never experienced the trauma of it?

Recently, though, I’ve sent messages telling you what an amazing job you’re doing.

You’ve been by Deb’s side throughout, making her last few weeks as memorable as possible, with outings to Ascot and the Chelsea Flower Show. And, as magical as it looked in the photographs, I know what it must have taken out of you and the family.

Some people may have looked at the pictures and thought: ‘Oh, she’s a bit thin but she’s doing OK’ but I know, from experience, that her body will have been so weak by then that she would have been sleeping round the clock and could do little for herself.

X
I didn’t hold any meeting with Wike in France – Tinubu…Latest NewsPresidential candidate of the All Progressives Congress (APC), Asiwaju Bola Ahmed Tinubu, has debunked reports that he held a meeting with Rivers Stat…