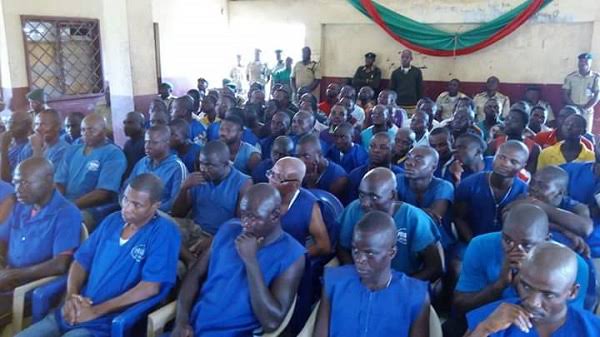 “Our new landmark agreement with Nigeria will increase the deportation of dangerous foreign criminals to make our streets and country safer.”

President Muhammadu Buhari has signed a deportation agreement with the United Kingdom, which will see the deportation of Nigerian illegal immigrants and criminals.

Most of the deportees were originally from Nigeria, but it was unclear if all those expected to be shipped into the country from the UK had Nigerian roots.

“Our new landmark agreement with Nigeria will increase the deportation of dangerous foreign criminals to make our streets and country safer and take the fight to the criminal people smugglers together to tackle illegal migration,” Ms Patel said on Twitter.

Official estimates place the number of foreign criminals in UK prisons at 9,815.

In Britain’s ‘New Plan for Immigration’, published in March, the Boris Johnson-led government said Britain had “taken back control of our legal immigration system by ending free movement and introducing a new points-based immigration system.”

“The UK now decides who comes to our country based on the skills people have to offer, not where their passport is from,” the policy document said.

On Thursday, Forbes reported that the first batch of deportees had left the UK for Nigeria and Ghana. According to Forbes, 13 Nigerians were deported to Lagos, and the flight then carried on to Ghana, where eight Ghanaians landed.

“The UK only ever returns individuals to their country of origin when the Home Office and, where applicable, the courts deem it is safe to do so. All asylum and human rights claims are carefully considered in accordance with our international obligations. Each individual assessment is made against the background of relevant case law and the latest country information,” a Home Office spokesperson told Forbes.

Talks of deportation and migration from the UK have been frequent after the Home Office announced plans to send asylum seekers to Rwanda in April.

The Rwanda plan would have seen asylum seekers who crossed the Channel to the UK on a flight to Rwanda to claim asylum there instead. The government has said the scheme would discourage others from crossing the Channel.

The plans have been stalled by the European Court of Human Rights intervention.

Back to Top
Close
X
Coke has a new flavor. It took inspiration from McDonald's…RifsCNNCoca-Cola has another new flavor. This time, it got some help.The latest product out of Coca-Cola Creations — Coke's innovation platform, which bro…