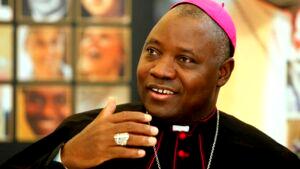 Metropolitan Archbishop of Abuja Catholic Archdiocese, His Grace, Rev. Ignatius Kaigama has condemned the series of abductions, persecution and killings of innocent Christians especially Catholic Priests in the country by terrorists describing the development as unfortunate and unacceptable.

Archbishop Kaigama spoke at the Episcopal Consecration and installation of Most Rev. Isaac Bundepuun Dugu as the second Bishop of Katsina-Ala Catholic Diocese, Benue state.

While lamenting the worsening insecurity in parts of the country, Archbishop Kaigama called for sustained prayers to end the development.

The Prelate who warned christians in the Diocese against tendencies that could bring about crisis in the church urged them to work in harmony with Bishop Dugu for the peace and development of the church.