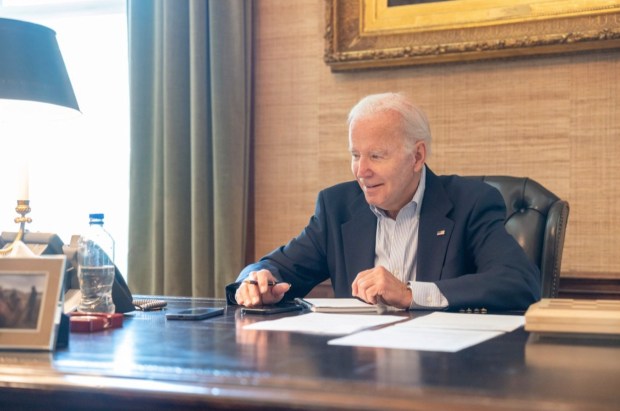 PRESIDENT Joe Biden has shared a photo of himself smiling from his desk after testing positive for Covid-19.

Biden‘s symptoms include fatigue, a dry cough and a runny nose, according to his doctor, who spoke after the White House announced the president’s positive diagnosis on Thursday.

The president reassured Americans that he’s “doing great” and is “keeping busy” as he shared an eerie picture of himself, similar to the one shared by his predecessor, Donald Trump, when he also came down with Covid.

“Folks, I’m doing great. Thanks for your concern. Just called Senator Casey, Congressman Cartwright, and Mayor Cognetti (and my Scranton cousins!) to send my regrets for missing our event today,” Biden said.

He signed off by saying, “Keeping busy!”

Biden, who at 79 is the oldest person to ever serve as president, is fully vaccinated and is twice boosted.

In a follow-up video, Biden thanked his supporters for their concerns and expressed his gratitude.

“I really appreciate your inquiries and concerns. But I’m doing well, getting a lot of work done. Going to continue to get it done. And in the meantime, thanks for your corners. And keep the faith. It’s going to be okay,” he said.

” He is fully vaccinated and twice boosted and experiencing very mild symptoms. He has begun taking Paxlovid,” Jean-Pierre said.

Back to Top
Close
X
Putin suffered ‘epic fail’ in Ukraine and forces may ‘run out of steam’ – he…Popular URLThe head of M16 believes that Russian president Vladimir Putin has suffered a "strategic failure" in the war with Ukraine. Richard Moore, the chief of…

'KEEPING BUSY': Joe Biden, 79, shares smiling photo from his desk as he fights Covid the day after revealing cancer diagnosis

X
World’s youngest serial killer who murdered 3 by age 8 is a ‘sadist …Popular URLThe current whereabouts of the world's youngest known serial killers who butchered three people by the age of just eight is currently unknown.Murderer…