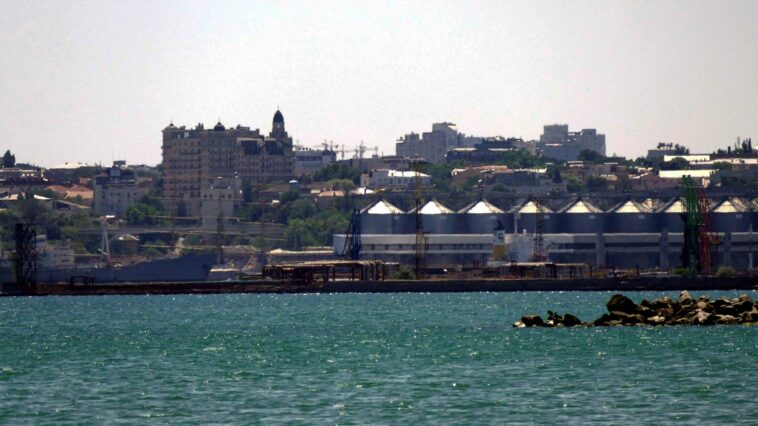 Less than 24 hours after Russia and Ukraine signed a deal to reopen Black Sea ports to resume grain exports, a series of missiles were fired at the port of Odesa.

“The enemy attacked the Odesa sea trade port with Kalibr cruise missiles,” said Ukraine‘s military, adding two were shot down while another two hit “the infrastructure of the port”.

Russia‘s ministry of defence has not claimed responsibility for the attacks, which followed the signing of a landmark agreement intended to avert an international food crisis.

Ukraine’s foreign ministry said the strikes were a “spit in the face” of Turkey and the United Nations which had less than a day earlier brokered the agreement in Istanbul.

Footage of the attacks shared on social media showed at least one waterside building on fire close to a container ship with thick black smoke billowing from the flames.

The US ambassador to Ukraine, Bridget Brink, tweeted: “Outrageous. Russia strikes the port city of Odesa less than 24 hours after signing an agreement to allow shipments of agricultural exports. The Kremlin continues to weaponise food. Russia must be held to account.”

UN secretary general Antonia Guterres – who also signed the deal to open exports from the ports of Odesa, Chornomorsk and Yuzhne at a ceremony in Istanbul – “unequivocally” condemned the strikes according to a UN spokesperson.

“These products are desperately needed to address the global food crisis and ease the suffering of millions of people in need around the globe. Full implementation by the Russian Federation, Ukraine and Turkey is imperative,” the statement added.

Estonia’s prime minister Kaja Kallas, tweeted: “That’s all you need to know about deals with Russia.”

Ukraine war: Strikes on port of Odesa are 'spit in the face' from Russia following grain deal

X
Monkeypox declared a global emergency as contagion spreads to over 70 nations…World NewsThe World Health Organisation has declared monkeypox a global health emergency as the disease has spread to more than 70 countries.The outbreak is an …