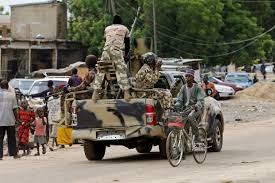 The heavy bang on her door and a seeming dismantling of her door and window protectors caught her off-guard. She jumped up from bed and sat down briefly to realize it was not a dream but somebody was actually pulling down her entrance doors and the windows to her room.

Being the type that likes to sleep naked, she quickly grabbed a pair of jeans and jumped into it and put on a blouse just as the door and the window caved in and the intruders walked in, numbering about twelve.

Her husband just travelled out of Abuja and she was home alone with her step-children, two undergraduates who had been home for some time since ASUU strike.

When she looked outside, she realized they were more in number than she thought. With a  gun pointed on her head  and a machete at her neck, they began to tell her what to do.

“I was scared to my pants. I never imagined that kind of thing would ever happen to me, not in Abuja. It was about 2am, the 28th day of July. They spoke good English and with northern accent. They were making specific demands and were not in a hurry. They stayed more than 30-minutes in my flat, taking away cash. Phones, laptops, jewelries and other valuables.

They asked me to open my phones and told me where to check the security number and they pressed on it. They asked for the pin and the pack that contained the phones when I bought them and I told them I left them in Lagos, that I was transferred recently to Abuja from Lagos. They asked where I work and I told them I’m working in a federal government establishment. They asked how long I have worked and I told them I just came to Abuja. It never occurred to me that with the gun on my head and the machete on my neck, all the truth was coming out. They were speaking good English.

”They left when they heard the police siren and we heard them exchanging words with the police. We were not sure if arrests were made. It was when the police came and they left that everybody came out, emboldened by the police presence. It was also then that we realized the robbers were more than 30. Twelve families were robbed that night. One of my neighbours who just had a baby kept thanking God because, they had already kidnapped the baby but later dropped him after much pleading and when the police arrived.

“We live in Nyanya area of Abuja but we realized it was not only us.  Insecurity is spreading fast that even those very close to the seat of power and perceived safe areas in Abuja are afraid. My colleague who lives at Wuse also shared the experience of how the devils visited her household.

“My husband was not home when it happened but after relaying the experience, we have engaged on a search for another house. I was told it wasn’t the first time the area was robbed and the other time, they also tried to kidnap a baby but it was rescued. I don’t know what they have against new born babies  and what they used them for but it was a scary experience. I don’t wish it anybody.”

Chinonye lamented the wave of crime in the Federal Capital Territory, FCT, which she said has gotten worse recently…

Back to Top
Close
X
Telcos kick as FG plans 12.5% call taxMore RifsNigerian telecommunication consumers under the aegis of the National Association of Telecoms Subscribers have said the move by the Federal Government …

Abuja attack: I was naked when 30 gunmen invaded our area, 12 of them bulldozing into my house — Abuja woman