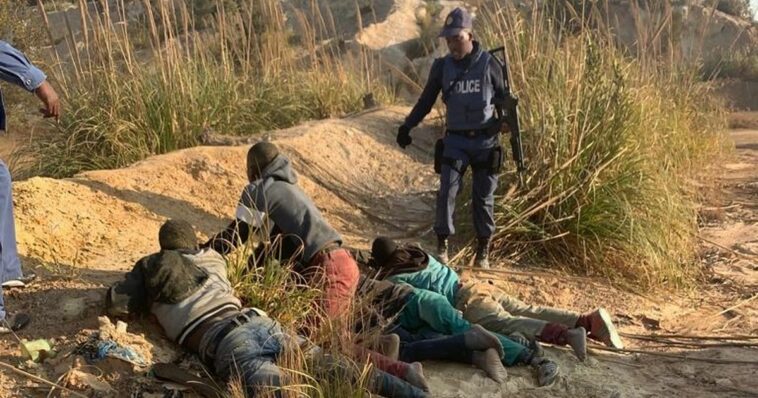 Eight models have been gang raped at gunpoint by a terrifying armed gang, while shooting a video at an illegal mine in South Africa.

The Red Button production team were filming the gospel music video near West Village, Krugersdorp, in Gauteng Province when they were attacked.

The girls tried to run when the armed illegal miners arrived wearing balaclavas – but the gang fired a volley of gunshots at them.

The models and production crew were ordered to lie down and the gang whistled and another 10 men in balaclavas appeared as well.

As the gang systematically robbed the crew and women of their mobile phones, rings, jewellery, handbags, cash and cameras the horrific rapes began.

The gang took one model at a time into the undergrowth while the robberies continued and gang raped them up to 10 times each before returning for another victim.

In all eight models and crew were raped 32 times with the youngest victim a 19-year-old.

When South African Police Services arrived at the scene a gunfight broke out and two illegal miners were shot dead and another injured but 17 escaped.

Police also arrested 65 other illegal miners in the area for suspected immigration offences while launching a massive manhunt for the rape gang.

Back to Top
Close
X
I became deaf after receiving over 30 injections – Gombe graduate…More NewsThe Zonal Coordinator of the Joint Association of People Living with Disabilities in Gombe State, Yahaya Yusuf, shares his experience with CHIMA AZUBU…