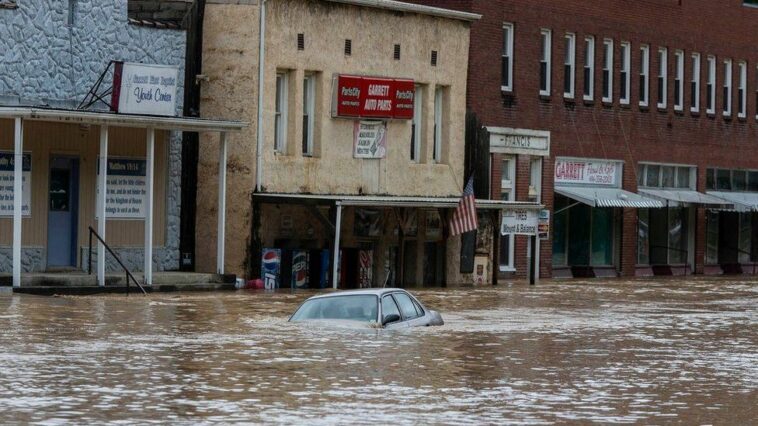 Devastating flash floods have killed at least 19 people in the Appalachia region of eastern Kentucky – the worst such disaster there for decades.

Kentucky Governor Andy Beshear said he expected the death toll to continue to rise. He said hundreds of homes and businesses had been flooded.

Among the dead are at least six children, including a one-year-old.

After an aerial tour with the National Guard, Mr Beshear said the flood “is by far the worst” he has seen.

There is widespread poverty in the affected area, where at least 33,000 people now have no electricity. The flooding – after torrential rain – caused mudslides and made roads impassable.

Appalachia has had flash floods before, but not on this scale, Mr Beshear said.

“Folks who deal with this for a living, who have been doing it for 20 years, have never seen water this high,” he said.

More rainfall is expected early next week, Mr Beshear said, urging people to have a safety plan in place.

Representatives from the US Federal Emergency Management Agency arrived on Friday to assist local rescue efforts.

Mr Beshear said it’s unclear yet exactly how many people are affected or missing. Some areas have been difficult to reach due to damaged portions on 28 state roadways.

He confirmed that the bodies of four young siblings were among those who were found – the oldest an eight-year-old and the youngest a one-year-old.

The children’s cousin – Brittany Trejo – told the Lexington Herald-Leader that the children and their parents “managed to get to a tree”, but later “a big tide came and wash them all away at the same time”.

She added the mother and father, who survived, were stranded at the tree for eight hours before help arrived.

Kentucky, like other parts of the world, has seen the impact of more frequent extreme weather events. The state has seen more inches of rain outside the historical average in the last 10 years, according to date from the National Oceanic and Atmospheric Administration.

Bill Haneberg, a climate expert and the state’s geologist, said this rainfall event is “extraordinary” for Kentucky.

“It is virtually unprecedented in the Appalachians,” he said.

Back to Top
Close
X
I’d slow down or ‘step aside’ – Pope Francis…Latest NewsPope Francis said Saturday he needed to slow down, telling reporters after a six-day Canada trip he could no longer maintain his hectic international …

Kentucky: At least 19 dead in worst Appalachia floods for years

X
We submitted application for a licence in Kenya since 2019- Flutterwave…Latest NewsOur attention has been drawn to reports with regards to our operating licence in Kenya. Like many other financial technology service providers in Keny…