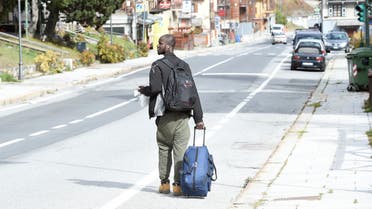 Police in Italy arrested an Italian man in the slaying of a Nigerian vendor whose brutal beating death on a busy beach town thoroughfare was filmed by onlookers without any apparent attempt to intervene physically.

Video footage of the attack has circulated widely on Italian news websites and social media platforms, eliciting outrage as Italy enters a parliamentary election campaign in which the right-wing coalition has already made immigration an issue.

“The murder of Alika Ogorchukwu is dismaying,’’ Enrico Letta, the head of the left-wing Democratic Party, wrote on Twitter, naming the vendor who died Friday. “Unheard of ferocity. Widespread indifference. There can be no justification.”

Ogorchukwu, 39, was selling goods midday Friday on the main street of Civitanova Marche, a beach town on the Adriatic Sea coast, when the aggressor grabbed a crutch the vendor used to walk and struck him down, according to police.

Video shows the assailant then wrestling the victim to the pavement as the victim fought back, eventually subduing Ogorchukwu with the weight of his body.

Police chief Matteo Luconi told Italian news channel Sky TG24 that onlookers called police, who responded to the scene after a suspect had fled and attempted to administer aid to the victim. It was not clear if he died at the scene…

Back to Top
Close
X
US orders departure of personnel from Mali over attack fears…AfricaGuardian NGThe United States has ordered non-emergency personnel and their families to leave Mali due to a heightened risk of attacks, the State Depar…

X
‘Shame of a nation’: 84 arrested after gang rape in South Africa…AfricaMass sexual assault of eight women has shocked the country with the president denouncing ‘horrible acts of brutality’.More than 80 people arrested fol…