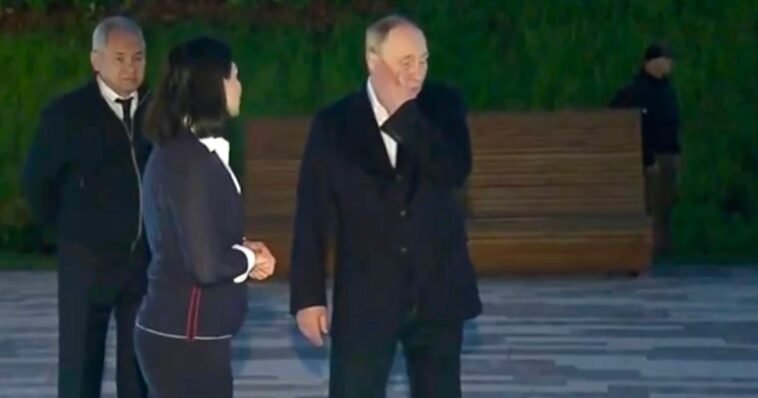 New intrigue has emerged over warmonger Vladimir Putin’s health with a video showing him unable to use his right arm when he is attacked by mosquitoes.

The Russian President is also seen apparently limping as he walks next to the daughter of his defence minister Sergei Shoigu.

The footage is from a weekend of activities marking Navy Day in Russia during which Putin said the navy would receive new hypersonic missiles.

Shoigu’s daughter Ksenia, 31, was showing around a military museum for which she heads.

Putin is seen being attacked by mosquitoes on the right side of his face.

His right arm hangs limp by his side and he instead uses his left hand to shoo away the insects.

The Kremlin president is also seen walking awkwardly, evidently with a limp, alongside Shoigu’s daughter with her father also present.

These are the latest videos suggesting that Putin, aged 69 and proud of his macho image, has undeclared health problems.

Reports have suggested he has a permanent squad of doctors close to him when he travels around Russia or abroad.

There have been claims – from Ukraine and elsewhere – that body doubles are sometimes used when Putin is unable to attend an event.

Ukraine’s head of military intelligence Major-General Kyrylo Budanov alleged a lookalike was deployed when he arrived in Tehran earlier this month.

He said: “Please look at the moment of Putin’s exit from the plane. Is it Putin at all?”