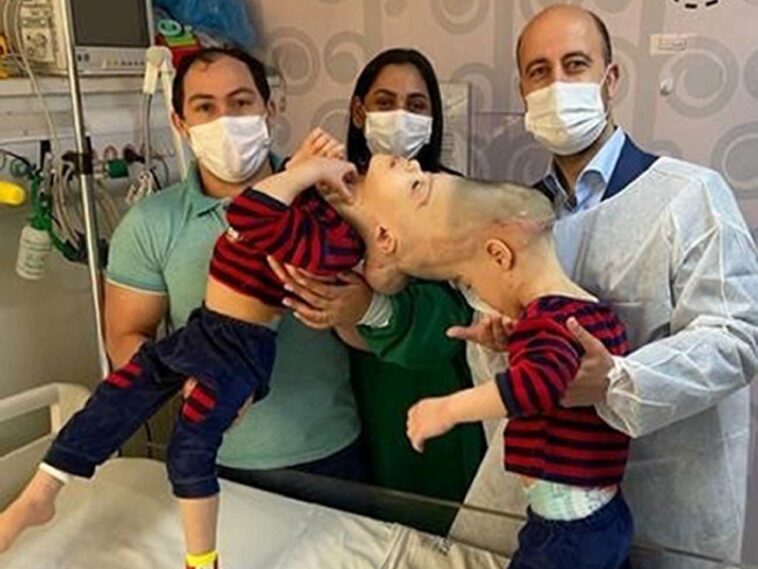 A pair of Brazilian twins who were conjoined at the head have been successfully separated by a UK-based surgeon.

The boys have had seven surgeries, involving more than 33 hours under the knife in the final two alone and almost 100 medical staff.

The procedures were led by Mr Jeelani, alongside Dr Gabriel Mufarrej, the head of surgery at Instituto Estadual do Cerebro Paulo Niemeyer. Surgeons spent months trialling techniques using virtual reality before beginning the real procedures on the boys.

Mr Jeelani described the operation as a “remarkable achievement” by medics following the success.

He said: “The successful separation of Bernardo and Arthur is a remarkable achievement by the team in Rio and a fantastic example of why the work of Gemini Untwined is so valuable.

“Not only have we provided a new future for the boys and their family, we have equipped the local team with the capabilities and confidence to undertake such complex work successfully again in the future.

“It is through this process of teamwork and knowledge-sharing globally that we can hope to improve the outcome for all children and families that find themselves in this difficult position.

“This is only possible through generous donations from members of the public.”

“We are delighted that the surgery…

Back to Top
Close
X
New studies bolster theory the coronavirus emerged from the wild, not a Chinese lab…HealthNBC NewsIn one study, which incorporated data collected by Chinese scientists, University of Arizona evolutionary biologist Michael Worobey and his co…

Conjoined twins whose brains were fused together separated by UK surgeon

X
Earth’s shortest-ever day has scientists panicking over possible ‘de…ScienceEarth has recorded its shortest day on record, sparking panic among scientists. A miniscule 1.59 milliseconds was shaved off the normal 24-hour rotati…