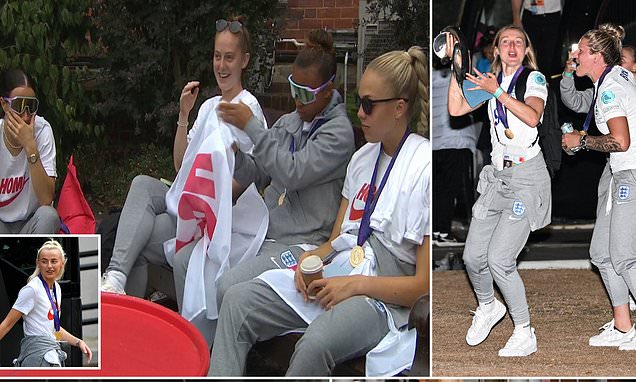 England’s pride of heroic – and hungover – Lionesses have emerged including matchwinner Chloe Kelly and captain Leah Williamson following a night of partying until 4am ahead of a Trafalgar Square victory party with fans today after a record 23.3million watched them win the Euro 2022 final.

The team were congratulated by the Queen and then celebrated the win late into the night – including wild dancing at Wembley, on the team coach and even in the car park outside their hotel – after making history and beating Germany 2-1.

The 87,192-strong attendance in the stadium smashed the record for either a men’s or women’s Euros final and saw the team end more than 50 years of hurt by delivering the nation’s first major football trophy since 1966. In extra time super substitute Miss Kelly fired them into the history books after beating Germany in a tight final that captivated millions and tens of thousands watching in pubs and fan parks across the country.

X
Strike: We've not heard from education minister – ASUU…In the NewsThe National Executive Council of the Academic Staff of Union of Universities has failed to suspend the ongoing strike action, which has led to a shut…