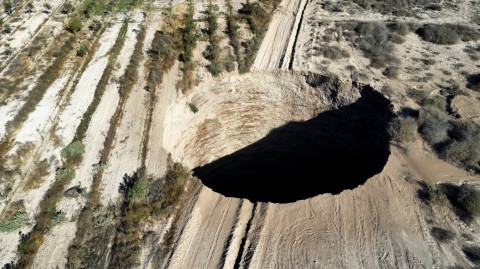 A mysterious sinkhole appeared in northern Chile over the weekend that is, frankly, gigantic.

Measuring about 85 feet in diameter the massive hole opened up in a mining area and is still growing.

Chilean media showed aerial images of the sinkhole which is probably the only way to do it justice.

The hole appeared on a copper mine, about 413 miles north of Santiago.

Chile’s National Service of Geology and Mining became aware of the sinkhole on Saturday and has reportedly sent specialist personnel to the area.

‘There is a considerable distance, approximately 200 metres (656 feet), to the bottom,’ the agency’s director David Montenegro said.

‘We haven’t detected any material down there, but we have seen the presence of a lot of water.’)

Officials have closed the entrance to the mine, which is located near the sinkhole. Obviously, nobody wants a wayward employee to tak…

Back to Top
Close
X
Brits warned of Spain heatwave as temperatures to hit 40C in holiday hotspots…EnvironmentThe SunBRITS heading to Spain this summer are being warned of another heatwave that could see some parts of the country hitting 40C.It is expected to …

Absolutely ginormous sinkhole opens up in Chile - and it's growing

X
Source of River Thames ‘dries up’ as hosepipe ban looms for London…EnvironmentStandardThe source of the River Thames has “dried up” due to the prolonged period of warm weather, experts have said.Amid intense drought across the c…