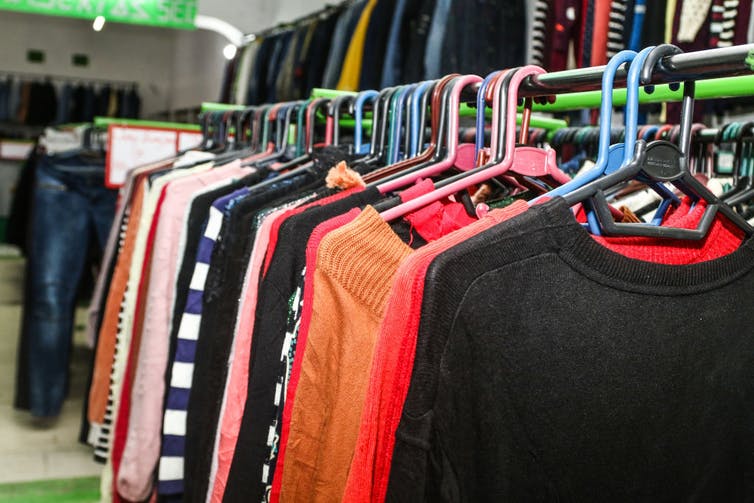 In recent years the global secondhand apparel market for clothing and shoes has grown exponentially. In 2002 used clothing exports were worth US$1.4 billion. Despite a slowdown during the COVID-19 pandemic exports were close to US$4 billion in 2020.

Some of this growth has been driven by well known brands and high street retailers developing in-house clothing resale and establishing partnerships with digital secondhand platforms to find new uses for preloved fashions, especially luxury fashions.

In the west, secondhand clothing has acquired a new cachet for its sustainability and its role in circular economies. A circular economy links production and consumption to minimise waste through reusing, repairing, refurbishing, recycling as well as sharing and leasing. This has driven a trend that by far surpasses the growth of the overall apparel market.

In addition to reuse and upcycling in the west, substantial volumes of used clothing donated to charitable organisations continue to be exported to countries in the global south, among them in Africa.

But the west’s over-consumption of clothing and the export it gives rise to is not without problems. Firstly, secondhand clothing imports in Africa generate millions of tonnes of textile waste. Secondly, the popularity of the secondhand clothing trade has prompted arguments about its adverse effects on domestic textile and clothing industries.

I wrote about the international secondhand clothing trade in a book published in 2000. My research was focused largely on Zambia. In the book I examined the interplay between environmentalism, charity, recycling and thrift. I also explored how secondhand clothes were about more than imitating Western styles. And traced how items were altered into garments that fitted into local cultural norms of etiquette.

Over the last two decades several processes with global scope have changed the landscape in unimaginable ways. This is true in Africa too. Despite these changes, I still think that, rather than representing fashion dumping, current clothing practices demonstrate some of the cultural and socioeconomic benefits of the used clothing trade. Holding significant value for those who create and pursue them, such clothing projects have transformative potentials that are far from trivial.

Changes in the global clothing landscape

The first big change has been the digital age which brought internet access and new inspirations from transnational images, products and styles. It has also facilitated internet commerce and innovations in both new and secondhand markets.

Thirdly, the expiration in 2005 of the World Trade Organisation’s Multi-Fibre Arrangement enabled tariff-free entry for clothing and textiles manufactured in China into previously restricted markets on an unprecedented scale. Concerns about the growing import from China soon eclipsed the public criticism of imported secondhand clothing, which continued to fill its own popular market niche.

And fourthly, new actors entered the global export of secondhand clothing. Among these were India and China.

For a while, the global COVID-19 pandemic significantly reduced or closed production of clothing and apparel almost everywhere. Problems at many points of the global commodity circuits and their upstream and downstream supply chains came into glaring view along with widespread retail closures and the piling up of excess inventory.

At one end, in South and Southeast Asia, poorly remunerated garment workers were not paid. At another, in France and elsewhere, some luxury brands incinerated unsold goods to prevent devaluing the brand name on resale markets. And brand retailers in the US and Europe sold deadstock (unsold inventory) to upcyclers to use in their design rather than ending as waste in landfills.

Today in Zambia as elsewhere in Africa, small-scale tailors and fashion entrepreneurs operate in a segmented clothing market that is far less competitive than it is interactive as they diversify and shift their activities to get by. The secondhand clothing seller, the retailer of ‘Chinese clothing’, the upscale boutique operator in the shopping mall along with the tailor, the seamstress, and the up-and-coming designer are serving the different needs of their fashion-conscious customers.

At the same time they all are contributing to that overall well-dressed presentation and stylistic innovation for which many African countries are so well known. Their work entails an ongoing economic and creative struggle to make a living and professionalise the fashion scene. Most operate within their country’s huge informal economy, lacking substantive state support or enduring sponsorships.

The fashion potential from the creative clothing economy in African countries has not been tapped. At the same time, secondhand clothing has not fallen away from popular dress practice. Quite the contrary. Used clothes are being repurposed but with fresh fashionable spins. This sometimes involves turning recycled garments into upcycled outfits. Open-air tailors and seamstresses working from markets and homes as well as aspiring designers in fashion studies in Africa and beyond are busy sourcing readily available secondhand clothes for alteration and creative redesign into new garments and accessories.

There is also a practical and economic aspect involved in this reuse of secondhand clothing. Consumers in many African markets consider imported garments from China to be of inferior quality to the clothes they find in secondhand markets.

Attracting customers from diverse economic and ethnic backgrounds has developed as an accepted part of the overall clothing market. Select secondhand clothing enters a special niche as vintage clothing while damaged garments are shredded and creatively repurposed. They are recycled into knotted and crocheted toys and woven into baskets, for example, and objects for interior decoration such as table runners and pillowcases.

In addition, everyday fashions are changing as young people challenge constraining gender and religious dress norms, for example by wearing tight and short clothing in public, playing out their desire to dress as they like. Adapting imported used clothes to their cultural sensibilities about bodies and dress, they localise them in the process.

Back to Top
Close
X
‘Shame of a nation’: 84 arrested after gang rape in South Africa…AfricaMass sexual assault of eight women has shocked the country with the president denouncing ‘horrible acts of brutality’.More than 80 people arrested fol…