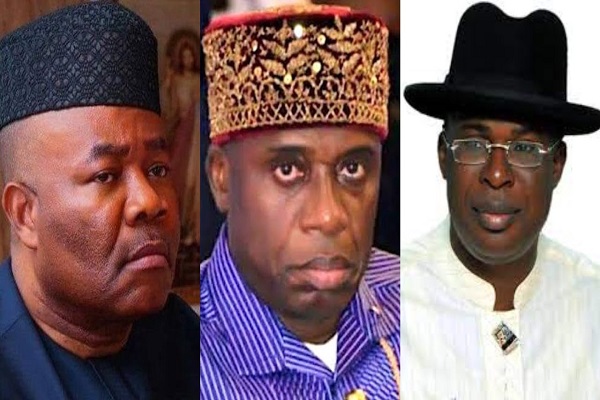 Top politicians from the Southsouth zone are intensifying their push for the control of the Niger Delta Development Commission (NNDC).

The NDDC is an agency saddled with interventionist projects for oil-producing areas.

Among the gladiators are two former ministers, Chief Godswill Akpabio, the immediate past Minister of the Niger Delta Affairs and Mr Rotimi Amaechi who until May this year, was Minister of Transport.

Also believed to be scheming for the control of the agency is Minister of State for Petroluem Resources, Mr Timipreye Sylva, and Deputy Senate President Ovie Omo-Agege.

The All Progressives Congress (APC) stalwarts are working round the clock to influence the appointment of the agency’s managing director as well as its finance director.

The agency has been run by an interim management board since 2019 and the gladiatora are backing different persons for the plum job.

Incidentally, Amaechi, who is strongly believed to have influenced the appointment of Umana Okon Umana as the new Niger Delta minister, is said to be using  his closeness to President Muhammadu Buhari and an influential member of the “Villa cabal” to get his nominee from Rivers State appointed as Managing Director as “rehabilitation” for him after failing to clinch the APC presidential ticket. This is necessary “to keep and service his support base in Rivers State”.

Both Amaechi and Akpabio resigned their portfolios as ministers in April to contest the presidential ticket of the ruling party, but failed at the primary.

The latter’s subsequent bid to have the senatorial ticket for Akwa Ibom Northwest as a “consolation prize” is currently still hanging in the balance.

Already, the Council of Traditional Rulers in Bayelsa has declared that it is the turn of Bayelsa to produce the Managing Director.

Though sources close to Amaechi were very confident his candidate would emerge “because he has the President’s ears and those of the Villa cabal”, the sentiments against the former Rivers governor were that he had “monopolised the NDDC board since the inception of the Buhari administration”, having also handpicked the two immediate past substantive Managing Directors, Mrs. Ibim Semitari and Mr. Nsima Ekere, who was arrested in May by the Economic and Financial Crimes (EFCC) over an alleged N47b fraud in the NDDC.

Akpabio, on the other hand, is said to be rooting for Denyabofa Dimaro who also reportedly enjoys the backing of Umana. One of the odds against Dimaro, is that he is over 76 years old, and seen “as too old for the rigours of office and should be retiring by now”.

Read the full story in The Nation

Intrigues as Amaechi, Akpabio, Sylva battle for control of NDDC

X
Woman arrested for alleged child stealing, says ‘I paid N500,000 to prostitute t…More NewsA woman, Chinyere Nwosu, found with a two-week-old baby boy and discovered not to be his mother, said that she decided to pay N500,000 to a prostitute…