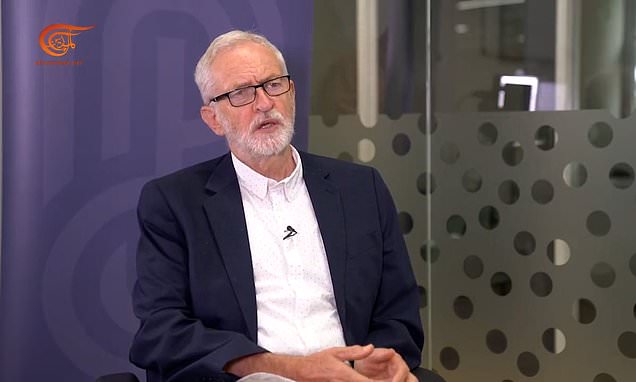 Jeremy Corbyn has criticised the UK’s decision to send military aid to Ukraine, accusing the West of ‘prolonging and exaggerating’ Russia’s war.

The ex-Labour leader, who infamously refused to blame Russia for the Salisbury poisoning in 2018, said leaders should instead force a peace deal between the pair – turning to the African Union and Arab League, including Syria, for mediation.

He also bemoaned the fact that ‘Ukrainians are dying… and Russian soldiers are dying’ in an interview with a pro-Assad TV channel, whilst condemning NATO expansion for causing ‘greater strain and greater stress.’

A recent poll showed 61 per cent of Ukrainians are against ending the war until all territory occupied by Russia, including Crimea, is back under their control.

There is also a broad consensus between experts and analysts that striking a deal now would favour Moscow, allowing Putin to ‘freeze’ the war while rearming and reinforcing before restarting it at a time of his choosing – as he did in 2014.

But speaking to Al Mayadeen, a pro-Assad TV station based in Lebanon – which is controlled by Iran-backed proxy group Hezbollah – Corbyn argued the opposite.

He said: ‘What I find disappointing is that hardly any of the world’s leaders use the word “peace”, they always use the language of more war and more bellicose war

Corbyn did say he ‘disagrees’ with the Russian invasion, but then parroted a Kremlin talking-point by adding that arming Ukraine will ‘prolong and exaggerate’ the war.

Meanwhile, he praised UN chief Antonio Guterres for travelling to Moscow to meet with Putin, insisting the global body should be at the forefront of negotiating peace.

If the UN cannot help, Corbyn suggested, then the African Union or Arab League – which includes Syria – should mediate because they ‘have no direct economic interest one way or the other’.

In fact, Russia has arms-dealing agreements with dozens of African nations from whom it also imports natural resources…