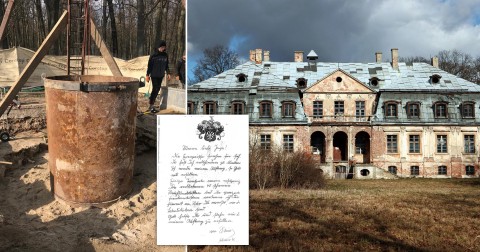 Treasure hunters are on the edge of their seats after being given the green light to dig up a buried canister that ‘could contain 10 tonnes of missing Nazi gold’.

Millions of pounds of cash, jewellery and other valuables may be hidden in the grounds of an 18th century palace in Poland.

Legend has it, wealthy Germans were urged to hand their valuables over to the SS to stop Russia’s advancing Red Army from swiping them at the end of World War II.

But the loot vanished, with speculation this was down to SS boss Heinrich Himmler ordering officials to use it to help set up a Fourth Reich.

The cannister is suspected to include the so-called ‘Gold of Breslau’ which ‘went missing from police headquarters’ in what is now the nearby Polish city of Wroclaw.

It’s claimed that a diary written by a high-ranking SS officer and a map given to descendants may have now revealed where it is.

A group that studies German-Polish relations claims the stash may be hiding underneath an orangery in the palace, which is in the village of Minkowskie.

All could become clear on September 1 when the The Silesian Bridge Foundation will launch their dig.