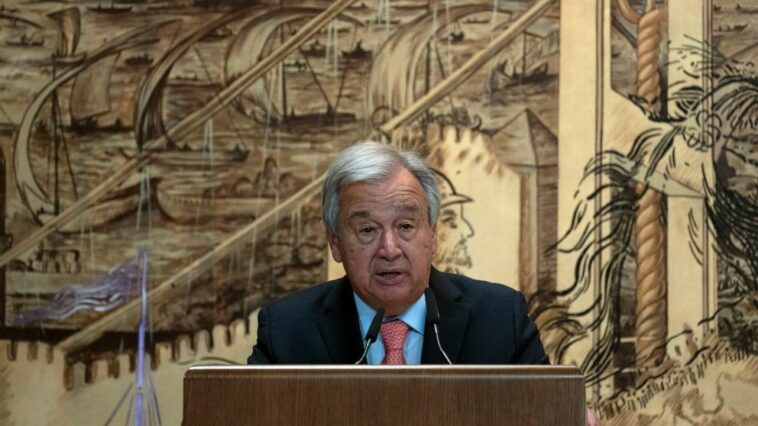 The United Nations chief is warning that “humanity is just one misunderstanding, one miscalculation away from nuclear annihilation.”

The United Nations chief warned Monday that “humanity is just one misunderstanding, one miscalculation away from nuclear annihilation,” citing the war in Ukraine, nuclear threats in Asia and the Middle East and many other factors.

Secretary-General Antonio Guterres gave the dire warning at the opening of the long-delayed high-level meeting to review the landmark 50-year-old treaty aimed at preventing the spread of nuclear weapons and eventually achieving a nuclear-free world.

The danger of increasing nuclear threats and a nuclear catastrophe was also raised by the United States, Japan, Germany, the U.N. nuclear chief and many other opening speakers at the meeting to review progress and agree to future steps to implement the Nuclear Nonproliferation Treaty, known as the NPT.

U.S. Secretary of State Antony Blinken said North Korea is preparing to conduct its seventh nuclear test, Iran “has either been unwilling or unable” to accept a deal to return to the 2015 nuclear agreement aimed at reining in its nuclear program, and Russia is “engaged in reckless, dangerous nuclear saber-rattling” in Ukraine.

He cited Russian President Vladimir Putin’s warning after its Feb. 24 invasion that any attempt to interfere would lead to “consequences you have never seen,” emphasizing that his country is “one of the most potent nuclear powers.”

This is contrary to assurances given to Ukraine of its sovereignty and independence when in gave up its Soviet-era nuclear weapons in 1994, Blinken said, and sends “the worst possible message” to any country thinking it needs nuclear weapons to defend itself and deter aggression.

Japanese Prime Minister Fumio Kishida said divisions in the world since the last review conference in 2015, which ended without a consensus document, have become greater, stressing that Russia’s threat to use nuclear weapons in the Ukraine war has contributed “to worldwide concern that yet another catastrophe by nuclear weapon use is a real possibility.”

German Foreign Minister Annalena Baerbock accused Russia of “brutally violating the assurances” it gave Ukraine in 1994 and said Moscow’s “reckless nuclear rhetoric” since its invasion of its smaller neighbor “is putting at risk everything the NPT has achieved in five decades.”

Putin appeared to roll back on his nuclear warning in a message of greetings to NPT participants posted on his website Monday.

“We believe that a nuclear war cannot be won and must never be fought, and we stand for equal and indivisible security for all members of the world community,” the Russian leader said.

Putin said his country “consistently follows the letter and spirit” of the NPT and expects all parties to “strictly comply with their commitments” and make “a significant contribution” at the conference to strengthening the non-proliferation regime “to ensure peace, security and stability in the world.”

Most recently, Blinken said Russia seized Europe’s largest nuclear power plant in Zaporizhzhya and is using it as a military base to fire at Ukrainians, “knowing that they can’t and won’t shoot back because they might accidentally strike a nuclear reactor or highly radioactive waste in storage.” He said this brings the notion of having “a human shield to an entirely different and horrific level.”

Russia’s delegation to the NPT issued a statement Monday night strongly rejecting Blinken’s contention that Russia is using the Zaporizhzhya plant as a military base, saying a limited number of servicemen are there “to ensure safety and security at the power plant.”

Rafael Grossi, director general of the International Atomic Energy Agency, said the Ukraine conflict is “so grave that the specter of a potential nuclear confrontation, or accident, has raised its terrifying head again.”

He warned that at the Zaporizhzhya nuclear plant “the situation is…

UN chief warns world is one step from `nuclear annihilation'