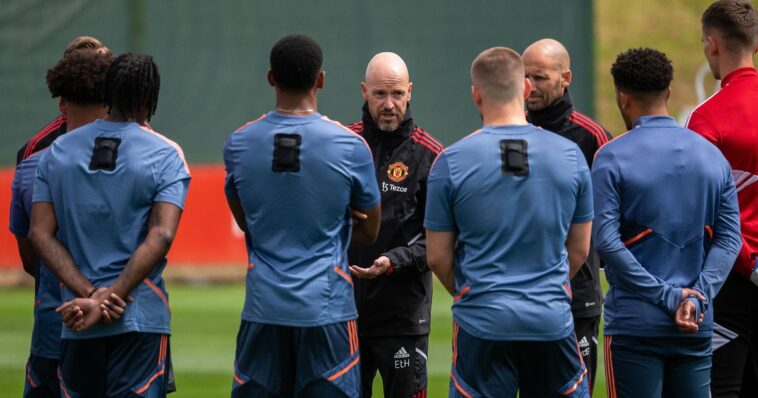 Manchester United boss Erik ten Hag appears to have made a final decision on Alex Telles and Hannibal Mejbri’s immediate futures following their furious training ground bust-up in May.

Telles and fiery teenage starlet Hannibal Mejbri clashed at Carrington after Man United’s 4-0 humiliation at Brighton in the penultimate match of last season and had to be pulled apart by teammates. Then-boss Ralf Rangnick was so disappointed by the incident he abandoned the training session early.

Ten Hag took over the reins from Rangnick at United shortly after and inherited the problem, but the Dutchman was clear on his solution from the very beginning, as first reported by Mirror Sport.

Ten Hag’s plan was to offload Telles and keep Mejbri at United, and the left-back is now very close to completing a year-long loan move to Sevilla, where Anthony Martial played last season.

Telles joined United in a £15.4million deal from Porto in 2020 but struggled to make the left-back position his own, with Luke Shaw largely overshadowing him during his two seasons at the club.

The recent introduction of Tyrell Malacia has made things even harder for Telles, who started only one of United’s six pre-season friendlies this summer. He will be looking to impress in Spain this campaign to secure a permanent move to the club or elsewhere.

Transfer Focus: Cristiano RonaldoThe Man United star reportedly has an offer from a rival team, with boyhood club Sporting Lisbon in the mix.

“I said to myself, ‘Oh yeah, I need to work hard!'” Hannibal told Pro-Direct Soccer France. “I didn’t come here for nothing, not to have on my CV: ‘I played for United’. I came to prove to the world that a young person from Paris, from the neighbourhood, can come and impose himself. And me…I’m ready to risk everything to succeed at United.”

This particular problem isn’t the only one Ten Hag has inherited since taking the United hot seat after Cristiano Ronaldo announced he wants to leave for a club playing in the Champions League...

Back to Top
Close
X
Chelsea remain 'vigilant' and seek discount for €50m Man Utd target, transfer would 'dam…SoccerFootball365Chelsea have reportedly ‘sounded out’ Inter Milan about signing their full-back Denzel Dumfries this summer on a permanent basis.The Blues …