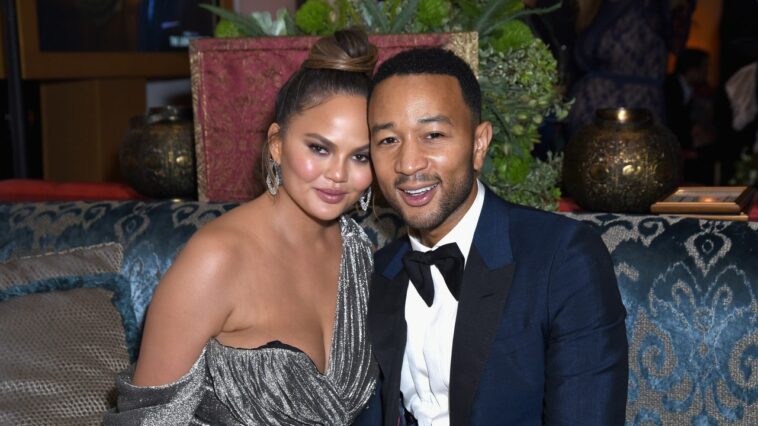 Chrissy Teigen and John Legend announced they have another baby on the way after suffering a devastating pregnancy loss in September 2020.

The model revealed on Instagram Monday that she is pregnant with her fourth child after undergoing another round of egg retrieval and IVF, sharing a photo of herself in a cropped tee by BUMPSUIT and Gucci underwear that showed off her growing baby bump. “The last few years have been a blur of emotions to say the least, but joy has filled our home and hearts again,” she captioned the image. “1 billion shots later (in the leg lately, as u can see!) we have another on the way.” Teigen went on to explain that after the loss of her last baby, Jack, almost two years ago, she still finds herself fearful about this pregnancy, writing, “Every appointment I’ve said to myself, ‘ok if it’s healthy today I’ll announce’ but then I breathe a sigh of relief to hear a heartbeat and decide I’m just too nervous still. I don’t think I’ll ever walk out of an appointment with more excitement than nerves but so far, everything is perfect and beautiful and I’m feeling hopeful and amazing. Ok phew it’s been very hard keeping this in for so long!”

Teigen and Legend are also parents to a 6-year-old daughter, Luna Simone, and 4-year-old son, Miles Theodore. In September 2020, the couple announced they had lost their son shortly after he was born and Teigen was hospitalized for bleeding. “We are shocked and in the kind of deep pain you only hear about, the kind of pain we’ve never felt before,” the Sports Illustrated star shared in a highly emotional Instagram post at the time. “We were never able to stop the bleeding and give our baby the fluids he needed, despite bags and bags of blood transfusions. It just wasn’t enough.”

She continued, “We never decide on our babies’ names until the last possible moment after they’re born, just before we leave the hospital. But we, for some reason, had started to call this little guy in my belly Jack. So he will always be Jack to us. Jack worked so hard to be a part of our little family, and he will be, forever.” Teigen also thanked friends, family, and fans for the outpouring of “positive energy, thoughts, and prayers” they received throughout that difficult period. “We feel all of your love and…

Back to Top
Close
X
I'm tired of my 45-year marriage – Charly Boy…Entertainment.Nigerian entertainer, Charles Oputa, popularly known as Charly Boy, has hinted at a possible split from his wife, Diane.Oputa took to his Twitter pag…