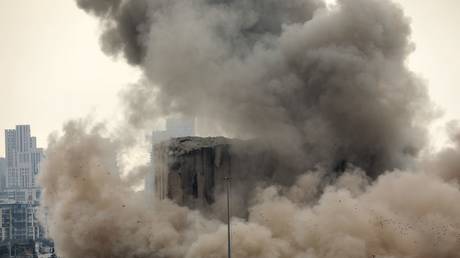 Video footage shared on social media captured the moment the structures fell to the ground, sending a cloud of smoke, dust and debris into the air.

The collapse of the towering structures occurred two years to the day after an enormous explosion killed 190 people, injured another 6,000, and laid waste to much of the city. The blast was blamed on an improperly stored stash of ammonium nitrate, and the fallout from the incident toppled the country’s government, cratered its economy, and jeopardized its food security.

I’ve just been sent this video of more parts of the Beirut grain silo collapsing (not my video) pic.twitter.com/Nmt28d9VmU

Back to Top
Close
X
DeSantis claims concern over monkeypox is overblown…More RifsPoliticoFlorida Gov. Ron DeSantis on Wednesday attempted to downplay anxiety over monkeypox, saying that politicians and the media have overblown the …