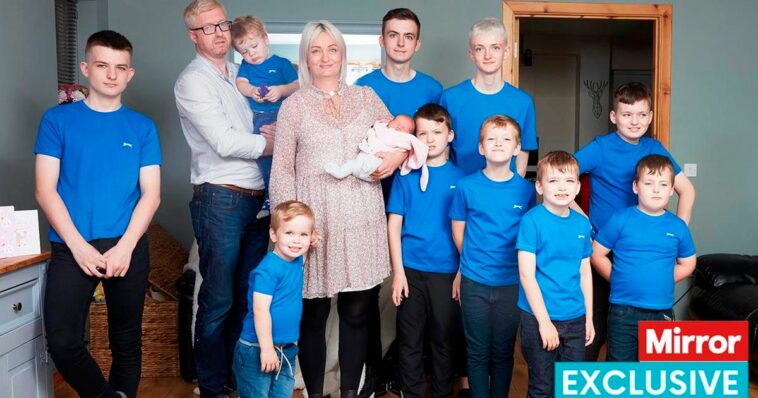 Some parents are keen to have both a boy and a girl, and will sometimes have more children than they planned to get one of each – but one mum’s taken that to the extreme.

Alexis Brett, 42, had ten boys in a row and while many would have resigned themselves and given up by that point, she carried on trying for a baby girl.

She was relieved when a scan detected her 11th child would be a girl and in 2019 baby Cameron was welcomed into the family – and since then Alexis has had another boy, Orran.

But Alexis and her partner, 47-year-old David, a retired train driver, didn’t stop there and now they’re having baby number 13 – and as luck would have it, it’s another girl.

Now Alexis, who’s a stay-at-home mum, says that she’s had enough and her 13th child will be her last.

She said: “I’ve had another boy and I’m due another girl on the 13th of this month. The family was big before but it’s even bigger now.

“It never bothered me whether it was a boy or a girl, it was just a shock – it was shocking this time too.

“She’s called Cameron, I don’t know what I’ll call the new one – I’ll decide when she gets here.

“Cameron is three at the end of this month – looking after her, there are some differences, but it’s about the same as the boys.