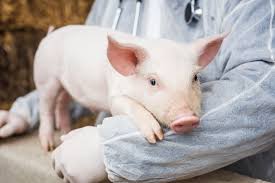 Scientists have restored blood circulation and other cell functions in pigs an hour after their death using new technology that delivers cell-protective fluid to organs and tissues.

The findings, published on Wednesday in the journal Nature, could help extend the health of human organs during surgery and also make more transplants possible.

While the scientists, including those from Yale School of Medicine in the US, did not find any electrical brain activity associated with normal brain function following the procedure, the research confounds conventional wisdom on life and death.

“This study demonstrates that our social convention regarding death, ie, as an absolute black and white end is not scientifically valid,” said Sam Parnia, director of critical care and resuscitation research at New York University Grossman School of Medicine.

“By contrast, scientifically, death is a biological process that remains treatable and reversible for hours after it has occurred,” Dr Parina, who was not involved in the study, said.

Just minutes after the final heartbeat, blood circulation begins to stop and cells in the body start to die due to lack of oxygen, and chemical changes that harm tissues and organ function begin.

However, the new study suggests a cascading cell failure on such a massive and permanent level doesn’t happen so quickly.

“All cells do not die immediately, there is a more protracted series of events. It is a process in which you can intervene, stop, and restore some cellular function,” David Andrijevic, study co-lead author at Yale School of Medicine said.

In the research, scientists applied a new technology consisting of a perfusion device similar to heart-lung machines – which do the work of the heart and lungs during surgery – and an experimental fluid containing compounds that can promote cellular health and suppress inflammation throughout the pig’s body.

They induced cardiac arrest in anesthetised pigs and treated them with the new technology, named OrganEx, an hour after death.

Researchers found that some key cellular functions were active in many…

Back to Top
Close
X
Scientists blur border between life and death by revving organs in dead pigs…ScienceScientists reanimate dead cells in pigs, a potential breakthrough for organ transplants The new research challenges the idea that the beginning of cel…