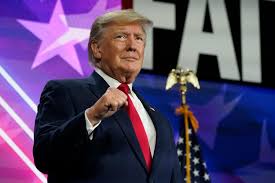 Since leaving office, Trump has tried to replace these issues with the (false) claim that he was the rightful winner in 2020. This issue might seem helpful — 73 percent of Republicans say Biden did not legitimately win the election. But there are two key problems.

First, Trump angered a chunk of his party by pushing to overturn the 2020 election. According to the Times-Siena poll, nearly 1 in 5 Republican primary voters said Trump’s actions on Jan. 6 “went so far that he threatened American democracy” and a quarter of Trump voters maintain (correctly) that Biden legitimately won the 2020 election. By themselves, these voters aren’t numerous enough to stop Trump from getting the nomination — but they might be the base for an alternative GOP nominee.

Second, election fraud is not a priority for most Republicans.

In three consecutive FiveThirtyEight-Ipsos polls, “election fraud or security” emerges as, at best, a secondary issue, with about 1 in 5 Republicans listing it as a top concern. Moreover, Echelon Insights, a GOP polling and analytics firm, found that 4 in 10 Republicans believe Trump’s focus on 2020 is a good reason to oppose him in 2024.

Back to Top
Close
X
President, save Nigeria from terrorists!OpinionVanguardMUHAMMADU Buhari was elected president based on his credentials as a war-tested military general and former no-nonsense military ruler. He was…

Trump is losing ground in the 2024 primary. Here’s why.