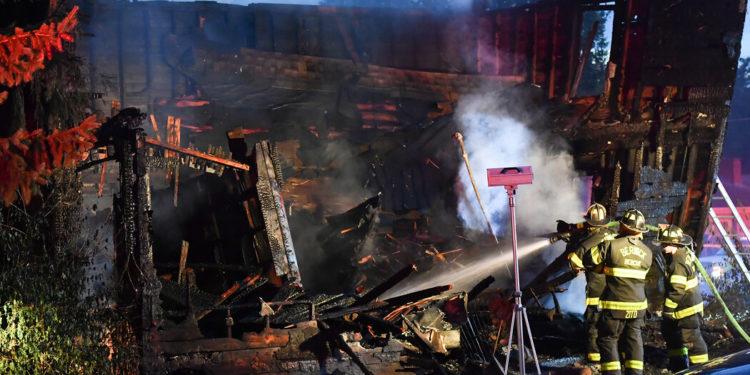 A fire described as “violent” and “forceful” swept through a home in Northeastern Pennsylvania early on Friday morning, killing 10 people, a neighbor and the authorities said.

Among those killed in the fire in Nescopeck, about 45 miles southwest of Scranton, were three children, ages 5, 6 and 7, the Pennsylvania State Police said. The other seven victims ranged in age from 19 to 79, officials said.

The cause of the fire is under investigation. The State Police said three people were able to flee the fire safely.

The neighbor, Michael Swank, said he awoke around 2:30 a.m. and heard popping noises, which he at first thought were gunshots. He looked outside and saw the porch of a house across the street engulfed in flames. He said that the noises he heard seemed to be cans of paint or propane tanks igniting and exploding.

“I knew the Fire Department was not going to make it in time” to rescue the occupants of the house, Mr. Swank said. He neither heard nor saw any activity to indicate anyone was trying to escape from the fire, he said.

“Boy, it was just a horrendous fire” that spread swiftly from the porch to the upper floors, he said. “It was an inferno. God bless those children that were in there. They didn’t have a prayer.”

Back to Top
Close
X
Nigerians knock Keyamo over comments on ASUU strike…Latest NewsNigerians on social media, Friday, knocked the Minister of State for Labour and Employment, Festus Keyamo, SAN, over his comments regarding the ongoin…